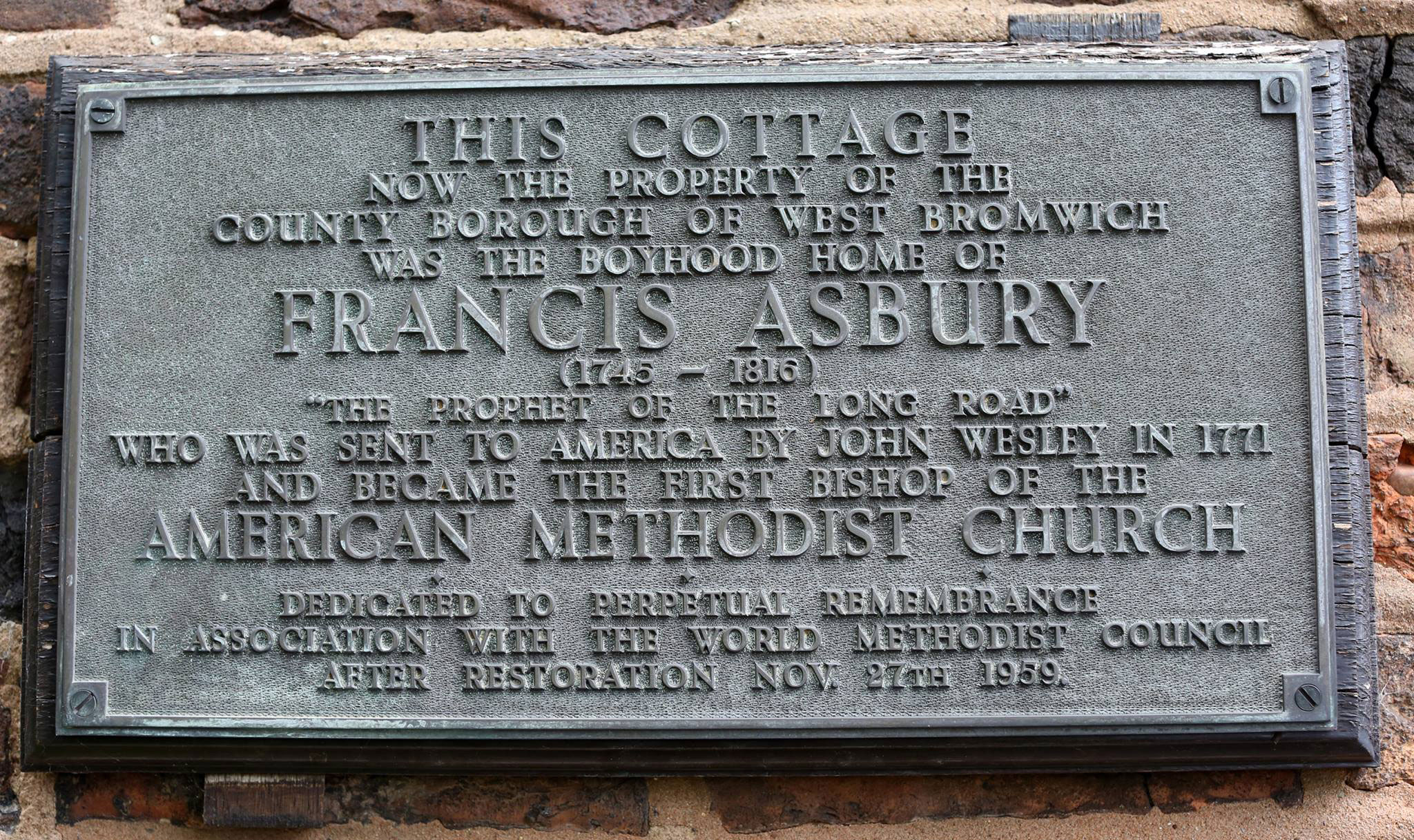 Commemorative Plaques are placed in memory of a person/persons or event, marking an association to a particular location.  They are a way to celebrate the link between person and building and form a historical marker for future generations. 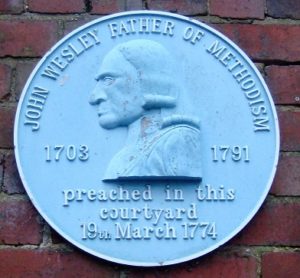 Oak House is a large timber framed Yeoman’s house dating back to the 16th century with brick extensions from the mid 17th century. John Wesley preached in the courtyard at the house on two occasions in the late 18th century when it was in the ownership of William Whyley.

Located on the wall adjacent to Oak House. Sponsored by Sandwell Council 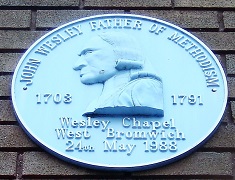 The present Wesleyan Chapel on the High Street, which is the largest in the West Bromwich Methodist Circuit was opened on February 16 1974. It replaced an older building on the site dating back to 1835 which itself was erected as a replacement. For two previous Methodist places of worship which were situated in Paradise Street.  Located on the Wesley Chapel, High Street. Sponsored by Sandwell Council This eighteenth century cottage was the boyhood home of Francis Asbury, the founding father of Methodism in the United States of America and the first American Methodist Bishop.  Asbury lived in this cottage until he went to America in 1771, aged 26.  He spent the following 40 years as a missionary travelling across America covering thousands of miles.  Located on Bishop Asbury Cottage, Newton Road, Great Barr. Sponsored by Sandwell Metropolitan Borough Council. 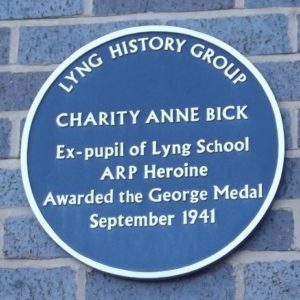 Charity Bick, the West Bromwich girl who registered as a civilian despatch rider during WWII at the age of 14.(she actually gave her age as 16). She assisted her father who was a Post Warden and during a very heavy air raid displayed outstanding courage for which she was awarded the George Medal for bravery.   The youngest ever recipient.

She later served in the Women’s Royal Air Force.  Located at Lyng School where she had been a pupil.  Sponsored by the Lyng History Group. 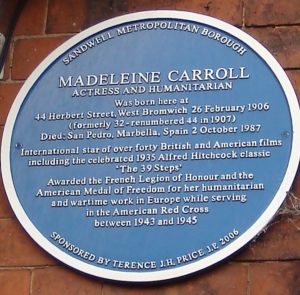 Madeleine Carrol (1906-1987), Hollywood actress and humanitarian was born on 26 February 1906 at no. 32 (later re-numbered 44) to parents John and Helene whose maiden name was Tuaillon.

The Carroll family which included their second daughter Marguerite, born 1907, lived here in Herbert Street for a period of seven years before moving into a larger house in nearby Jesson Street in 1912. Located on Herbert Street.  Sponsored by Sandwell Council and Local Historian Terry Price. 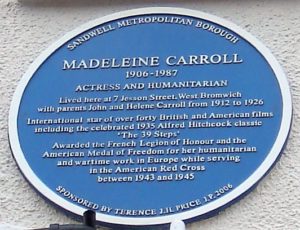 Madeleine Carrol lived here at No 7 Jesson Street with parents John and Helene along with sister Marguerite from 1912 until 1927 before embarking on her film career and eventually Hollywood stardom. The rest of the family continued to live here until 1939 when they relocated to Bromley, Kent. Located on Jesson Street, Sponsored by Sandwell Council and Local Historian Terry Price 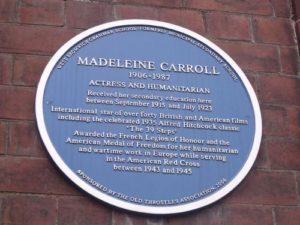 Between 1915 and 1923 Madeleine Carroll received her secondary education here before going on to Birmingham University where she obtained a B.A. in languages with honours in 1926.

The building in Lodge Road later became a grammar school and after its closure, an annexe of Sandwell College. Located on College Building, Lodge Road
Sponsored by The Old Throstles Association

The Guardians of the Poor Boardroom – Blue Plaque erected 2008 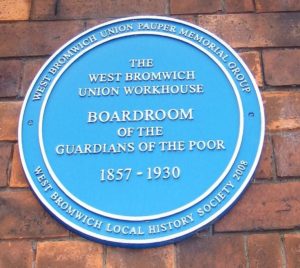 The Guardians of the Poor Boardroom is the last remaining part of the original West Bromwich Union Workhouse. The Boardroom was the venue for the weekly meetings of the Guardians of the Poor who were the administrators of the Union Workhouse and of the ‘Out Relief’ given to those who were too poor to carefor themselves or their families. Erected between 1855 and 1858 and closed with the Government Act of 1929.  Located on the wall of the Ante-Natal Unit, Sandwell Hospital, Hallam Hospital. Sponsored by West Bromwich Union Pauper Memorial Group and West Bromwich Local History Society. Captain Robert Edwin Phillips VC (1895-1968) lived here at Holyhead House, Hill Top with his parents Elizabeth and Alfred Phillips between 1907 and 1913. He was however born at No. 12 Queen Street, Hill Top on 11 April, 1895. During his military service (1914-1919) he carried out an act of supreme gallantry when on 25 January 1917 near Kut, Mesopotamia, under heavy enemy fire, he went to the aid of a fallen comrade. For this act of bravery he was awarded Britain’s highest honour, The Victoria Cross. Located on Holyhead House, 54b Hill Top. Sponsored by the Royal Warwickshire Regiment 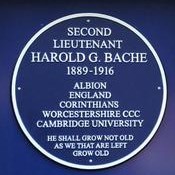 The football club paid tribute to Harold Bache, a former centre-forward and sporting champion, who was killed in WWI at the Battle of Ypres, just a few months after leaving the club as a volunteer for service.  He was 26 years old. The plaque was unveiled pitch-side then permanently mounted at the East Stand opposite the  Tony  Brown statue. 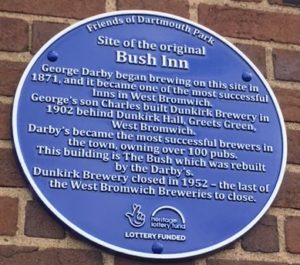 Part of a Heritage Lottery Project lead by Carol Hartill and Friends of Dartmouth Park, the plaque is to remember Darby’s, the most successful brewers of West Bromwich who started brewing on this site in the early 1870’s.  The original Bush Inn was built c1845 on the corner of Claypit Lane and Wood Lane.

The plaque is located on the current building which is now used as a Community Centre. Unveiled by Local Historian Terry Price BEM. Sponsored by Friends of Dartmouth Park/HLF.