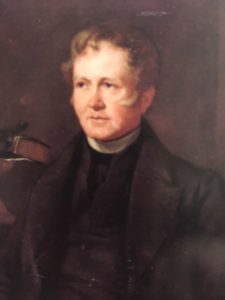 An Althorp connection to West Bromwich.

Born at the Admiralty, into one of the wealthiest and noble families in England, The Hon. George Spencer (1799-1864), having completed his education at Cambridge, was ordained as an Anglican priest with the pastoral care of the villages on the Althorp estate where he had grown up.

He quickly realised that he had a vocation rather than a job. He abandoned his life of privilege and the wealth and elegance of Althorp to devote himself to prayer and the care of the poor.  Religion became the cornerstone of his life.  Questioning some aspects of the Established Church he eventually converted to Catholicism in 1830 and after  being ordained in Rome, he came to work in the Black Country, based in Walsall and West Bromwich.

At this time there was no Catholic Church in the town but a site was bought and St. Michael and the Holy Angels opened in 1832. The first resident priest was George Spencer who had personally met over a third of the cost.

His father continued to make him comfortable for money but he lived simply, sought no luxuries, no comforts and instead placed all of his money in the Bishop’s hands.  Most days were spent walking the streets of the town visiting the poor and the sick.  One of his early converts here told of one morning when Father Spencer set off on his rounds his route took him past Hill Top boys school where the boys shouted after him and threw mud and stones at him. He took no notice but then they took hold of his coat and ripped it up the back. He did not mind but went on all day as usual, through Oldbury, Tipton and Dudley.

He used to leave home every morning with his pockets full of wine and food for the poor and sick without taking refreshment himself although he may have walked 20 miles in the heat of summer.  One winter’s day he gave them all his clothes except for those that he was wearing.

During his first year he opened three schools here and then a new mission in Dudley towards Christmas 1833. There was a time in 1835 when he became very ill and had to stay with his sister Lady Lyttleton at Hagley Hall to recover.

Due to his failing health in 1839 he was moved to Oscott College to be the spiritual director of the students and it was whilst there that he developed his relationship with the Passionists.

In 1846 he joined the Passionist community at Aston Hall taking the name Father Ignatius St. Paul.

After taking his vows in 1848 his first mission was to his old parishioners at West Bromwich.

The first church stood some distance down St. Michael Street and existed for nearly half a century. During the 1870’s plans were put in motion for a school and to remodel the church as a suitable memorial to Father Spencer. In 1872 the original church structure was demolished and work on a new building began at the corner of St. Michael Street and High Street. The new church was completed in 1907 with a tower added in 1911 and still stands today.

Princes William and Harry are related to Father Spencer through their mother Diana Spencer.