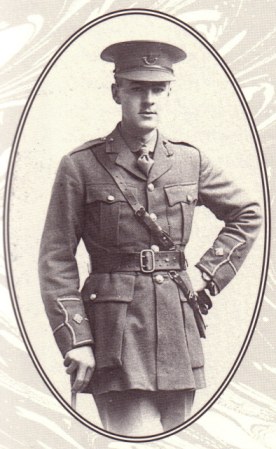 Geoffrey Bache Smith was born on October 18, 1894 to parents Thomas and Ruth Annie Smith and christened at Holy Trinity Church on November 28th.  He had an older brother Roger who was born January 19, 1891.  Their family home was Grove Crescent (Birmingham Road) West Bromwich. Both boys attended King Edward’s Grammar School, Birmingham and both were killed during World War I, only weeks apart.

At school Geoffrey was an extremely talented academic all-rounder, winning prizes for Latin, English and French.

It was at King Edward’s that Geoffrey met J.R.R. Tolkien and his friends who formed the T.C.B.S. (Tea Club and Barrovian Society).  It was a fellowship of talented, well-educated and idealistic schoolboys who met to trade ideas during secret tea breaks, first in the school library office and then the tea rooms of Barrow’s Stores.  Between them they had a wide range of interests, all of which rubbed off on the others.  Geoffrey became one of the four core members along with Tolkien, Christopher Luke Wiseman (1893-1987), Robert Quilter Gilson (1893-1916) son of the headmaster at King Edward’s. They shared the conviction that they would somehow change the world through art, literature, poetry and music. These four would continue to meet even when Smith and Tolkien were at Oxford and Wiseman and Gilson at Cambridge.

In October 1914 Geoffrey joined the Oxford University Officer Training Corps, applying for his commission on December 1st.  The forms were signed by his former Headmaster, Cary Gilson.  His application was accepted and he became a Second Lieutenant in the 8th Oxford and Buckinghamshire Light Infantry.  In April 1915 he  applied to transfer to the 19th Battalion, Lancashire Fusiliers (3rd Salford Pals).  By June he was promoted to Lieutenant and was posted to France in November.

All four of the TCBS joined up soon after the outbreak of war but only two would survive, Tolkien  and Wiseman.  Rob Gilson was the first to be cut down, leading his men out of the trenches in the first wave of the Somme offensive, on July 1st, 1916.  Next to fall was Geoffrey Bache Smith who was hit by shrapnel when his Battalion was shelled on November 29th, 1916.  He died on December 3rd from complications to the wound in hi 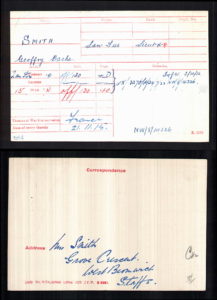 s arm.   In his last letter to Tolkien, Smith wrote, “My chief consolation is that if I am scuppered tonight – I am off on duty in a few minutes – there will still be left a member of the great T.C.B.S. to voice what I dreamed and what we all agreed upon.  For the death of one of its members cannot, I am determined, dissolve the T.C.B.S.  Death can make us loathsome and helpless as individuals, but it cannot put an end to the immortal four! ——May God bless you my dear John Ronald and may you say things I have tried to say long after I am not there to say them, if such be my lot”,  G.B.S.

Tolkien sent and received many sad letters at this time but few more poignant than that from Ruth Smith, Geoffrey’s mother, asking if Ronald could help to get her son’s poetry published.  The result was ‘A Spring Harvest’ which was printed in 1918 with a note by Tolkien.

Written after the death of Gilson?

Let us tell quiet stories of kind eyes
And placid brows where peace and learning sate:
Of misty gardens under evening skies
Where four would walk of old, with steps sedate.

Let’s have no word of all the sweat and blood,
Of all the noise and strife and dust and smoke
(We who have seen Death surging like a flood,
Wave upon wave, that leaped and raced and broke).

Or let’s sit silently, we three together,
Around a wide hearth-fire that’s glowing red,
Giving no thought to all the stormy weather
That flies above the roof-tree overhead.

And he, the fourth, that lies all silently
In some far-distant and untended grave,
Under the shadow of a shattered tree,
Shall leave the company of the hapless brave,

And draw nigh unto us for memory’s sake,
Because a look, a word, a deed, a friend,
Are bound with cords that never a man may break,
Unto his heart for ever, until the end.

A longing for home?

O much desired from far away
And long, I hold thee once again,
Thou undiminished treasury
Of small delights, yet nowise vain:

The cat curled on the cosy hearth,
The thrushes in the garden trees,
The memories of younger years,
The quiet voices, and the peace.

“It was all in the Black Countree”

It was all in the Black Countree,
What time the sweet o’ the year should be,
I saw a tree, all gaunt and grey,
As mindful of a winter’s day:
And that a lonely bird did sit
Upon the topmost branch of it,
Who to my thought did sweeter sing
Than any minstrel of a king.

also IWM The Lives of the First World War

Geoffrey was a close friend of J.R.R. Tolkien