A selection of local memories 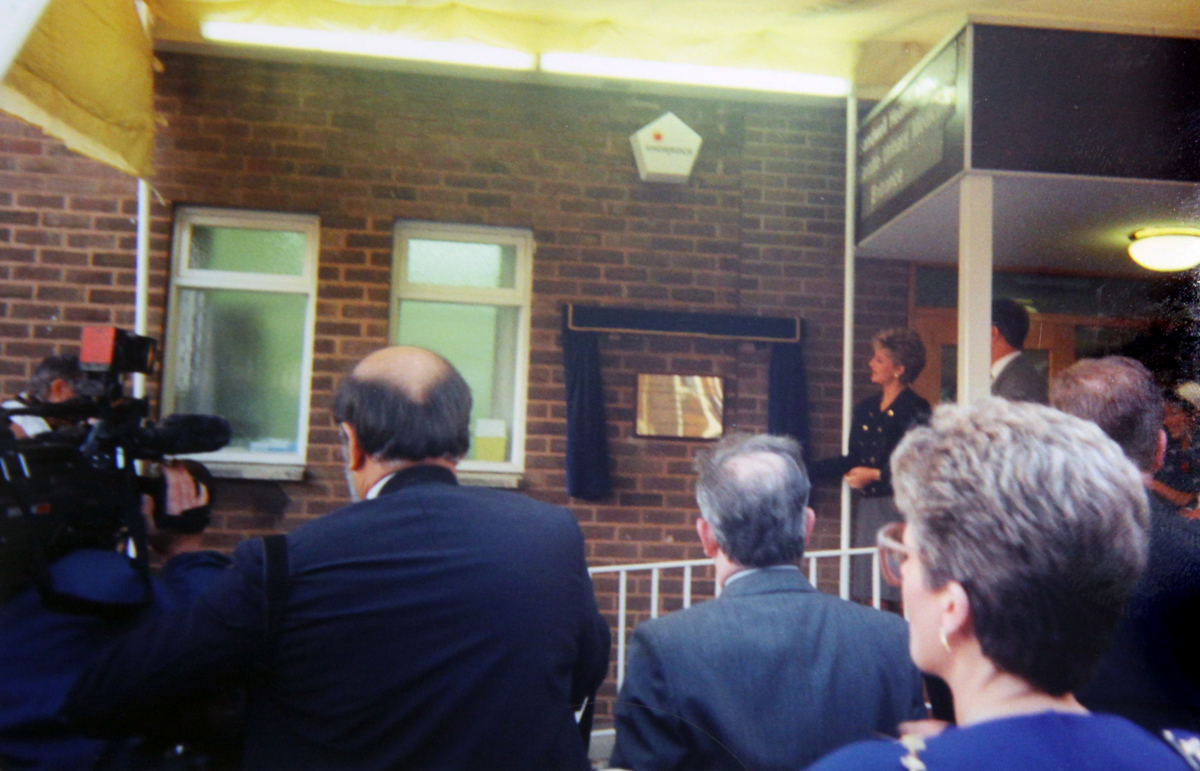 Keith Johnson, Hospital Porter, recalls a Royal visit.
“It was 10th November 1992 when Princess Diana came to visit. I had to be on the grounds early to tidy everything. At the time I was working on the incinerator and I had to go through all the hospital, the Out Patient Department,the main reception, A&E, sweeping all round those. That day sweeping the grounds was added to my agenda, so we had to start really early.

It was still dark and I said I really couldn’t see anything. So I was told to do it and then go back and do it again when it got a bit lighter. The coppers kept stopping me and asking me what I was doing.  All thee security and secret service people were there, checking everything, marking where the drains were, things like that. I was talking to one security officer and his Alsation dog peed on my leg. I didn’t get a chance to see Di, as they moved me off the grounds just she arrived. But I was close.”

Photograph above: Dartmouth Clinic, now the GUM clinic. The plaque that Princess Diana is unveiling is now housed inside the building.

Ann Doman looks back over a long career…
“I started my career at Sandwell General Hospital on Monday, 6th January 1976 as a student radiographer based at Hallam Hospital. The head of department was Miss P. Bryan, Superintendent Radiographer at West Bromwich and District Hospital, based at Edward Street, and her deputy Mrs O’Neill, Superintendent Radiographer and student mentor based at Hallam. The first six weeks are spent in block with student nurses doing basic studies and ward duties. I still the hospital corners are making beds.

The School of Radiography was situated at Dudley Road hospital, the Principle being Mr Murphy. As a student I lived on a grant of £50 per month, which was to cover all my living expenses, study material etc but I was able to claim travel expenses.

My career in Radiography ended as I failed to pass my second year photography exam. At this point Miss Bryan asked if I could work in medical records until I could regroup and find another job. In 1980 the position of clinical coding supervisor came up – this title was only because it was the only full-time position in the department) and I got the post. At this time coding was referred to as HAA or Hospital Activity Analysis. I’m still here 41 years later.

Over the years the role of clinical coding has changed. In the past it mainly dealt with local activity but with introduction of Payment by Results importance of the coding team within the NHS has come more to the fore. When I first started training it was learnt by Nellie technic but it has now become more professional, with a 21 day intensive standard course, two to three years mandatory refresher courses and after three or four years you are able to take the National Clinical Coding Qualification exam to become an Accredited Clinical Coder (ACC). This is now compulsory in most NHS Trusts. Once you have become an ACC, the world is your oyster – you can segway, after taking more training and exams into auditing or training or go freelance/agency contract coder.”

Notes:
Clinical coding is the abstraction of clinical data from information written by clinic clinician about patience condition which is converted into alphanumeric diagnostic and operative procedure codes. In this manner they can be easily studied, tabulated aggregated and sorted to statistical analysis, audit and research. These codes are used above national and international levels.

Payment by Results was introduced to the NHS from 2004-05, a system of linking the amount of funding a hospital receives to the to the amount of activity they undertake (rather than a block contract, which was a fixed sum of money for a broadly specified service).

Ann Harrison, nee Hughes
“I worked at West Bromwich and District General Hospital, Edward Street, between October 1961 and May 1964, in the Group Secretariat Department on the first floor next door to the Board Room. The staff covered the work of the Group Secretary, John Robins – who lived in a hospital property in Grange Road, West Bromwich – and the Deputy Group Secretary, Mr Pitchford. Also attached was Mrs Madeline Holden, who was the assistant to both of them, and did the work for most of the committees that met. Her husband was a senior member of the Finance Department, whose offices were in Bratt Street. Mrs Cutler, the sister of Mrs Holden, was Almoner* at the District Hospital.

Across the road, on the corner of Lombard Street and Edward Street, was the hospital laundry which was bombed during the Second World War. Behind that, there was the engineers department. On site was the Casualty and Out Patient Department, which also housed the telephone exchange and Medical Records Department, and had a small coffee bar run by the WRVS. The house of the Matron (Miss Shepherd) was also on site. Outside the front entrance to the hospital stood two stone lions. (They are still there today).

I was born in Hallam Hospital in 1943, the majority of this site is now taken over by Sandwell Hospital. Heath Lane was a small geriatric until Sheldon Ward was built on site in the 1960s. Portland House in Wednesbury was a Maternity Unit and had a German Matron. Moxley Hopsital was an Infectious Diseases Hospital. The Midland Centre for Neurology and Neurosurgery in Smethwick, affectionately known as MCNN, was the base for the Professor of Neurology and Neurosurgery until its move to QEH.”

Note
* The Almoners’ Department was a pre-NHS forerunner of the Social Work Departments found in modern hospitals today, a person whose job was to help people in hospitals with their financial and social problems. 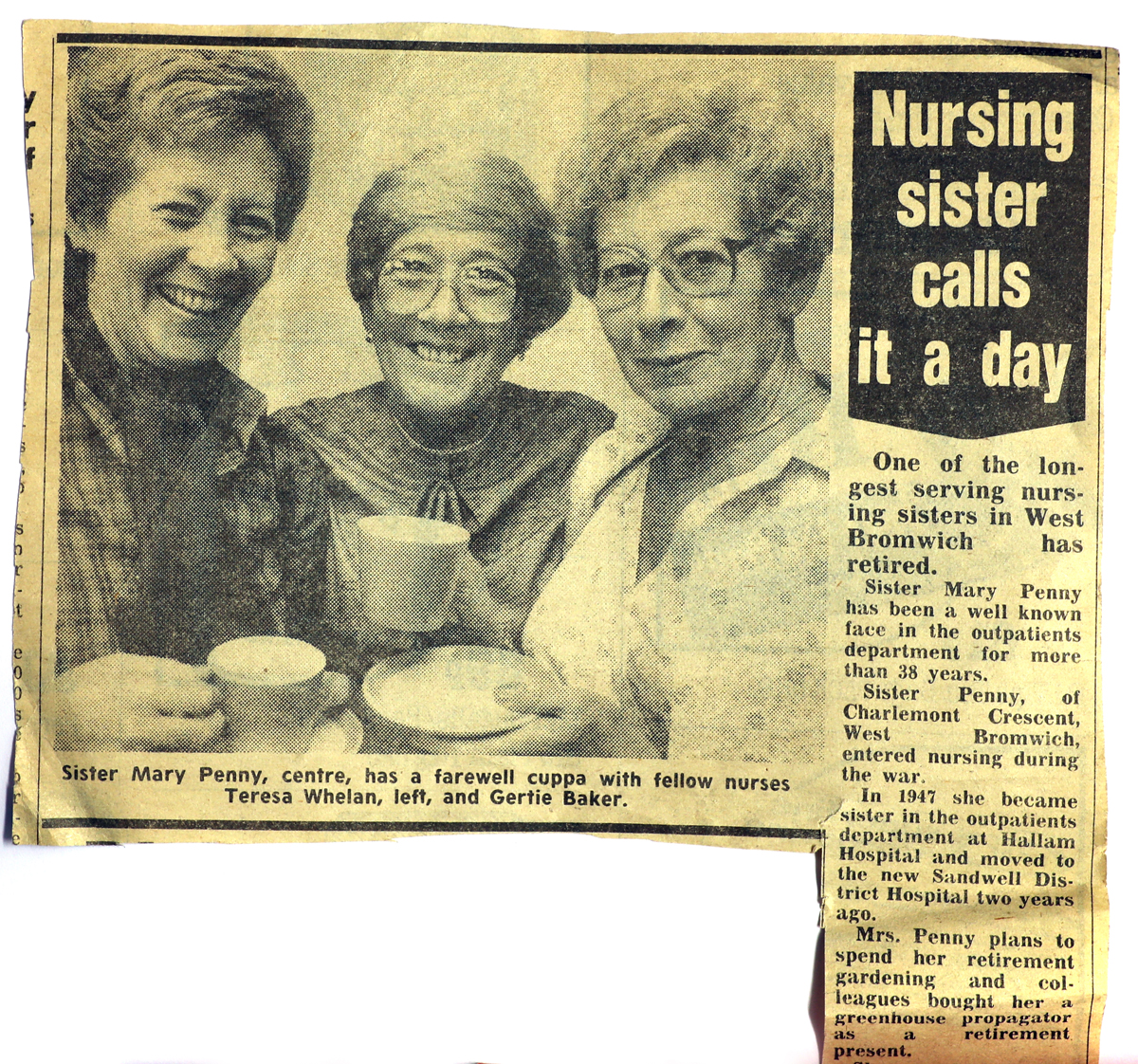 Anne Whitlock, nee Baker – The Quigley Sisters
“At the age of 19, Gertie arrived in West Bromwich in November 1943. She came from Roscommon, Ireland. It was the first time she had left her home town. She was soon followed by three sisters, Mary, Julia and Theresa. Gertie worked on the children’s ward with Julia, one of them working days, the other working nights. As they looked so alike, patients got very confused, thinking it was the same nurse.

They lived in the Nurses’ Home. They left the window unlocked to allow the nurses to get in after hours. The police also patrolled the grounds at night in a car, offering to drive nurses over to the office to take midnight returns. One officer drove her up to Barr Beacon instead – this was a popular courting spot, so popular they had a fish’n’chip van there. She ended up marrying a policeman.

For a prank once, they plastered a rather unpopular Doctor and left him in a wheelchair outside the Doctors’ residence.

During the Second World War, Gertie nursed the injured soldiers. She was nicknamed ‘Paddy’ because she was Irish. She would have to escort them to local dances. She recalled one soldier who got rather drunk and swung his crutches in the air pretending to dance. Unfortunately he fell over and his stump split open as he fell to the floor.”

Maureen Dudley shares some of her photographs and news cuttings.

In 1970, after a decade of working in nursing,  Maureen went on to be the first GP Practice nurse in Sandwell, returning to work at Hallam in the Day Unit in 1975 and then the new hospital on the site in 1979. She later transferred to the Breast Clinic as a clinical nurse specialist. She retired in 2005/6.

Maureen Dudley recalls: “This photograph was taken at the Gala Baths, circa 1958-59. It was a ceremony for the presentation of certificates to mark the end of Cadet Training and the Pre-nursing course at the District Hospital. We were then first year nurses – three years of nursing training followed. We had to live in the hospital for the first three months, where home sister looked after out welfare, making sure our food was served in the dining room and we ate all our meals. The first six weeks we walked to Beeches Road, to a large house which was our training school. The main tutors were Joe Plant and Sister Turley. At the end of this we took our first exams. One male nurse came to train from America and there were many nurses from Ireland, who had never been away from home and were very homesick.” 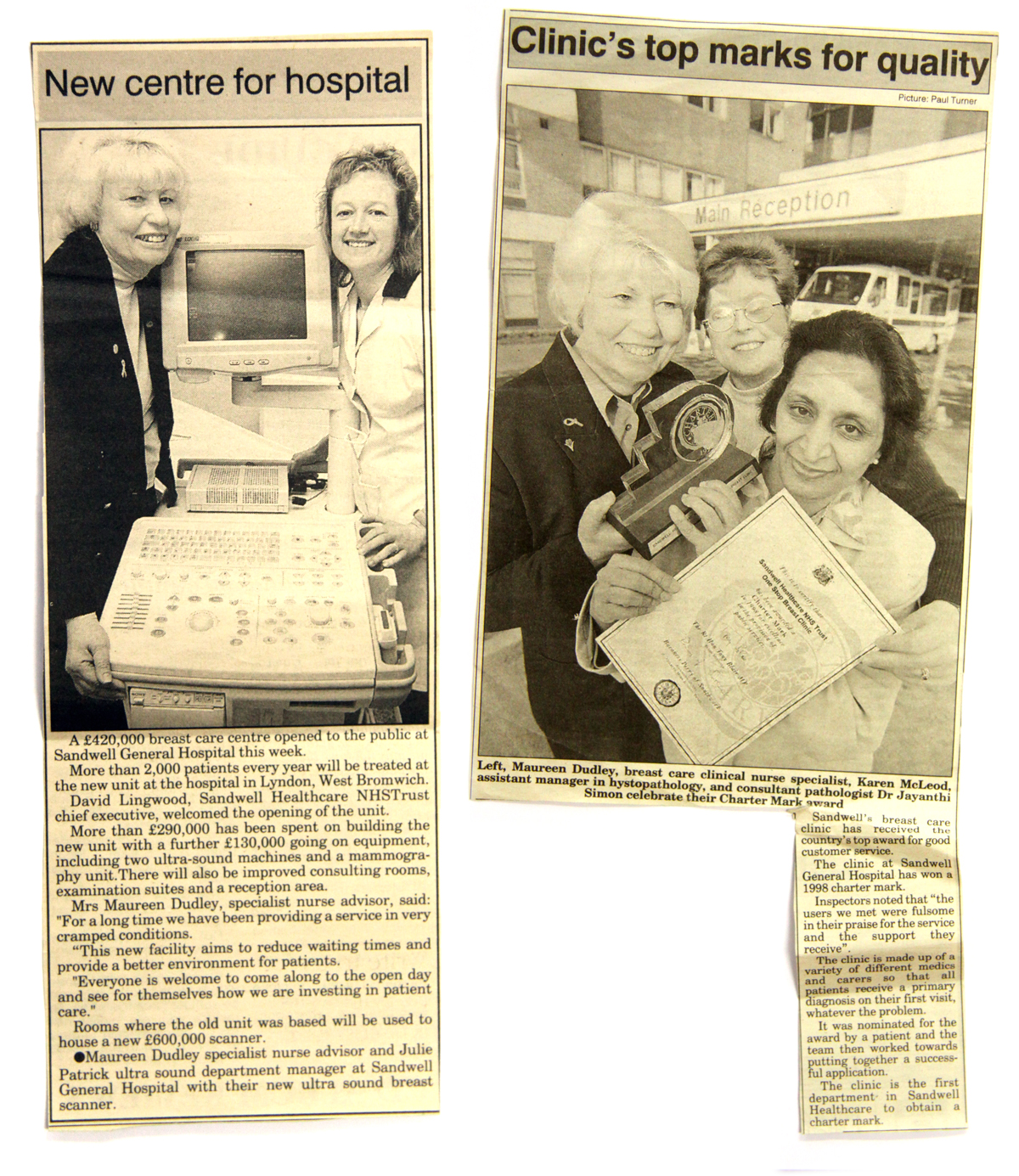 Maureen Dudley recalls: “The One Stop Breast Clinic was started in one room on the ground floor and women taking to Ultrasound and Mammogram rooms in the X-Ray Department. It was the first of its kind in the West MIdlands and it was set up by Mr A. Aukland, surgeon; Mr D.J Ellis, surgeon; D. Simon, pathology; Dr R. Donovan, Radiology, and myself, Mrs M. Dudley, Clinical Nurse Specialist. We transferred to Sandwell General District, where we then had our own reception. We were visited by staff from many other hospitals who wanted to set one up. A new £420,000 Breast Clinic was built in Outpatients to cater for over 2,000 patients a year, aiming to reduce waiting times and offer a better environment for them. The One Stop Breast Clinic won the Charter Mark twice, the country’s top award for customer care. We were the first department in Sandwell Healthcare to obtain it.”