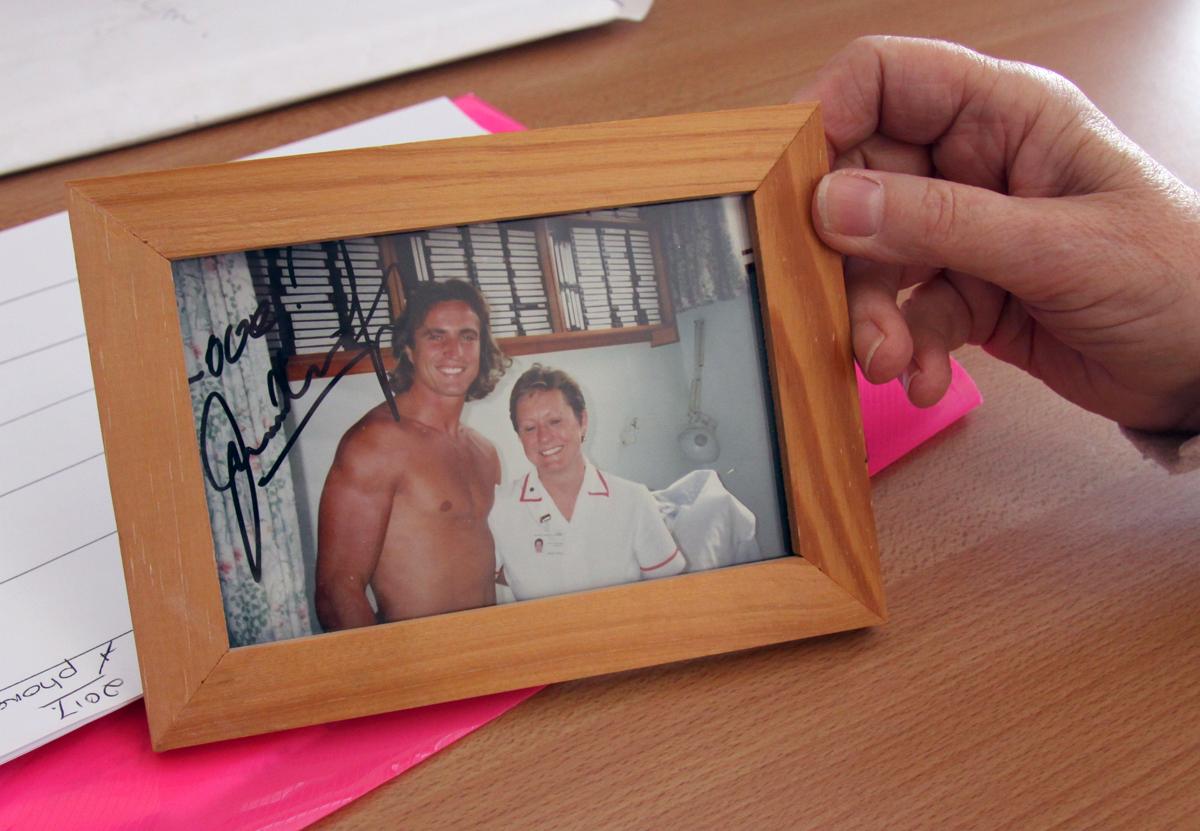 Amanda Ridney, Principal Cardiac Physiologist at Sandwell General Hospital.
“I started my working life in a steelworks and was very heavily involved in First Aid (quite common in steelworks and mining). I was a member of the First Aid Team entering into regular competitions, but when the steelworks began to decline I had to look for another job. I saw a job advertised for a Student Cardiology Technician, decided to give the NHS a try and I then stayed for 37 years, finally ending my career as a Principal Cardiac Physiologist, overseeing the non-invasive ambulatory section of the department. I started on 31st March 1980 (and retired in July 2017). Training at that time was basically in-house with courses when available. Nowadays, as with most jobs, a degree or masters qualification is mandatory. There are regular assessments and exams, as well as membership of the Associated Society of Cardiological Technicians. There is also regulation in the form of The Registration Council for Clinical Physiologists, which holds a voluntary register for practitioners in six disciplines of Clinical Physiology.

Cardiology was situated then in Out Patients, at the end of a corridor in four clinic rooms. The reason we were situated there was because the department had been overlooked in the new build and that was all that was available. The new hospital opened in 1978. The consultant physicians were: Dr Cadigan; Dr Walkden; Miss Tooth; Mr Kirkham; Mr Hennessy; Mrs Watney; Mr Simpson; Mr Jones; Dr Smith; Mr Aukland; Mr Ellis; Mr Bainbridge. These consultants worked closely with Junior Doctors and Technicians to interpret Electrocardiography results (ECG’s). Cardiology Technicians were part of the ‘Crash Team’ and carried the crash bleep – this alerts the team that someone somewhere in the hospital is in cardiac arrest. Cardiac Arrests were always managed by the medical on-call registrar and their team 24/7, whereas we only attended cardiac arrests Monday-Friday 9-5pm. Our job was to locate an ECG machine, take the defibrillator, connect the patient to the monitor and interpret the ECG tracing. This was quite a responsibility and our ECG interpretation was respected by everyone in the early days. When I was a student, most of my work involved recording ECG’s and if I had a £1 for every time someone said to me ‘I’m wired for sound’ I would be a very wealthy woman.

We weren’t allowed to come into work in our uniforms and so we had to get changed in one of the clinic rooms. I was standing in my bra and pants one day and I heard a knocking on the door. I said ‘Come in’ thinking it was one of my colleagues. To my horror it was one of the surgeons, Mr Aukland. He apologized and went out very quickly but never quite looked me in the eye after that. When I first worked at the hospital, patients were allowed to smoke in the orthopaedic wards and also staff in the staffroom and offices.

Dr Smith, one of our Consultants Physicians, was also heavily involved with Aston Villa Football Club, working as their team doctor. All the players had to have medical screening and so they came to Sandwell for their tests. The footballers had to have a variety of tests for insurance purposes. The hospital obviously got paid for providing this service, but what you couldn’t do was tell anyone they were coming. If they were seen in the hospital that was fine, but we couldn’t say a word. One day the infamous David Ginola* came along for tests. Within five minutes of him walking across the car park, staff were waiting in the corridor for his autograph. He had a very powerful presence and had the ability to turn the women in the department into ‘dribbling wenches’. Dr Smith wanted to take a photograph of myself with David. He had no top on and put his arm around me. I have to say I look a bit like the ‘village idiot’ in this photograph as my knees went to jelly.

At Christmas we tried to cheer everyone up and one year our manager persuaded us to dress up as elves for the day. We all felt a bit stupid but we made the patients laugh. I’m not sure what effect it had on the patients who arrested and woke up to see an elf recording their ECG.

During my time I have had to interrogate an implantable recording device removed from a patient who had been murdered, and then provide a statement. We also had a member of the public steal prescription pads and my own stamp with my name and position on it – he then tried to obtain drugs from a local pharmacy. Fortunately, the pharmacist didn’t recognize my name and informed the police. So I had to make another statement. He pleaded guilty so I wasn’t called to give evidence.

We once had one in-patient who came down from the wards for an echocardiogram (a heart ultrasound). He sat in the corridor waiting for his test; he was on oxygen and was just about to light a cigarette when I came out of the office and stopped him.”

*David Ginola – French international footballer who played for Paris St. Germain, Newcastle United and Spurs. He signed for Aston Villa for 2000-02. While in England, hefronted commercials for Braun shavers, Carte Noire coffee, Renault cars and L’Oréal hair products.In 2016, aged 49, he collapsed after suffering a heart attack during a charity football match. Clinically dead for eight minutes, he had to be shocked four times with a defibrillator. He was then rushed to hospital in Monaco, where he had a six-hour quadruple bypass operation to clear blocked arteries.