Glenys Welch shares her photographs of a 35 year career in healthcare. 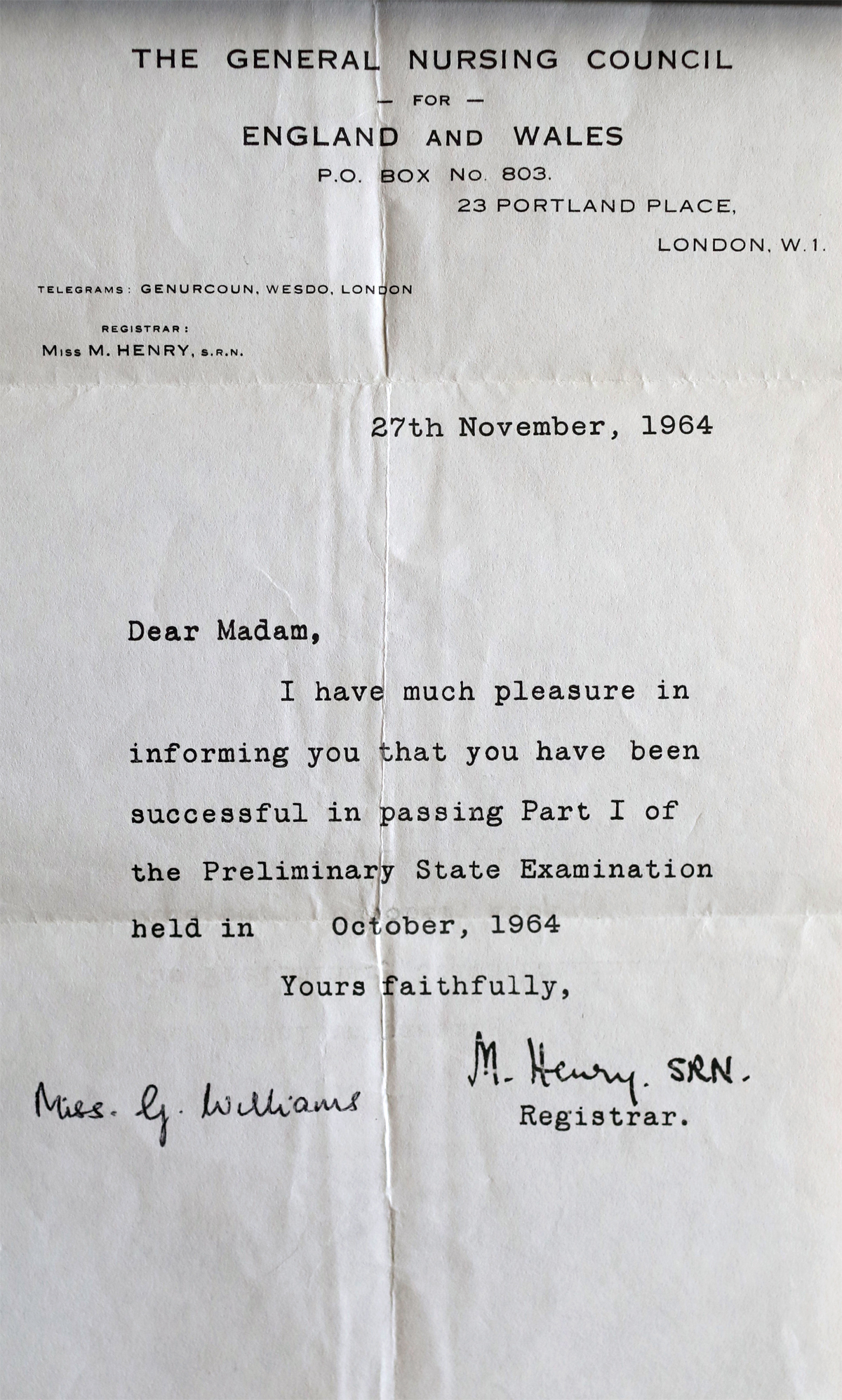 Glenys Welch (nee Williams) trained at Dudley Road Hospital and went onto work with Sandwell Healthcare for over 35 years. 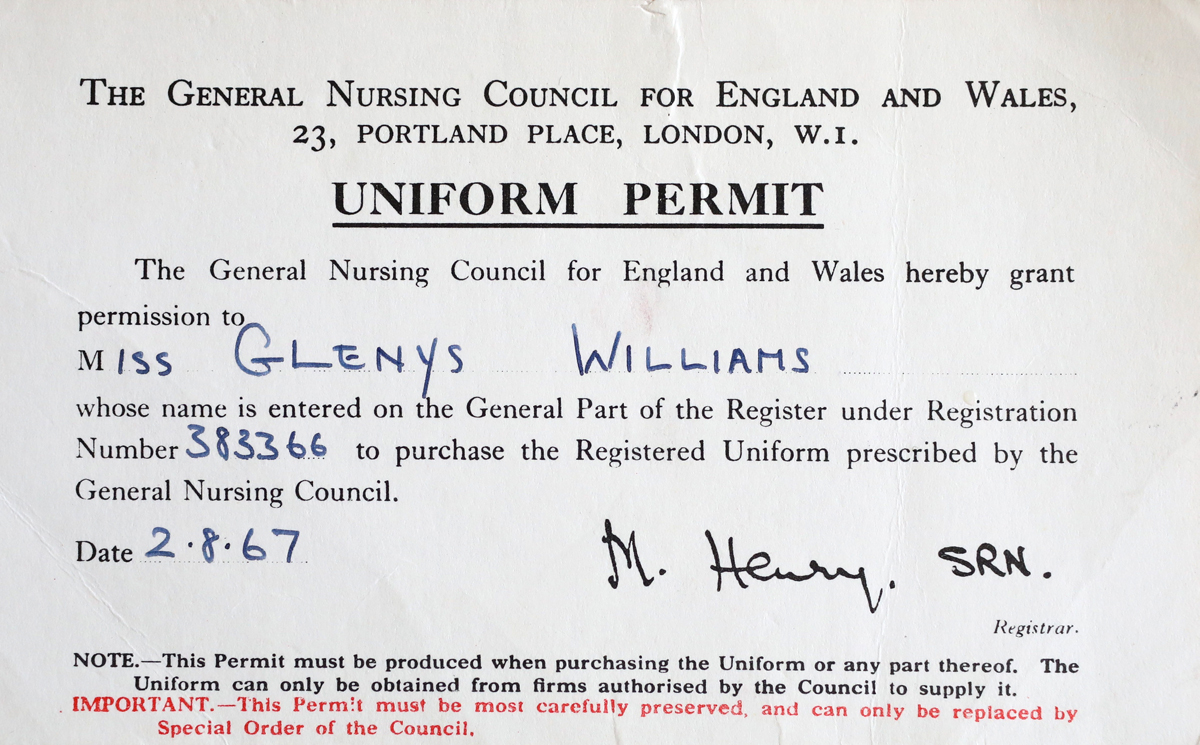 “I remember going up onto the roof at Dudley Road hospital, but I don’t remember how we even got up there. There’s a bench there, so it’s somewhere you must have been allowed to go to. Liz never finished her training, she was a very good nurse but she found the theory and exams hard. She went onto do Auxiliary Nursing instead. When we started training, it was for a State Registration Nurse, then a bit later they started doing a State Enrolled Nurse course, which was only two years and more practical based.  I think she would have been better doing that one, had it been available at the time. We kept in touch and we celebrated our 60th birthday together in Canada where she lives.” (Photograph, left to right: Karen, Eileen, Millie, Liz, Glenys) 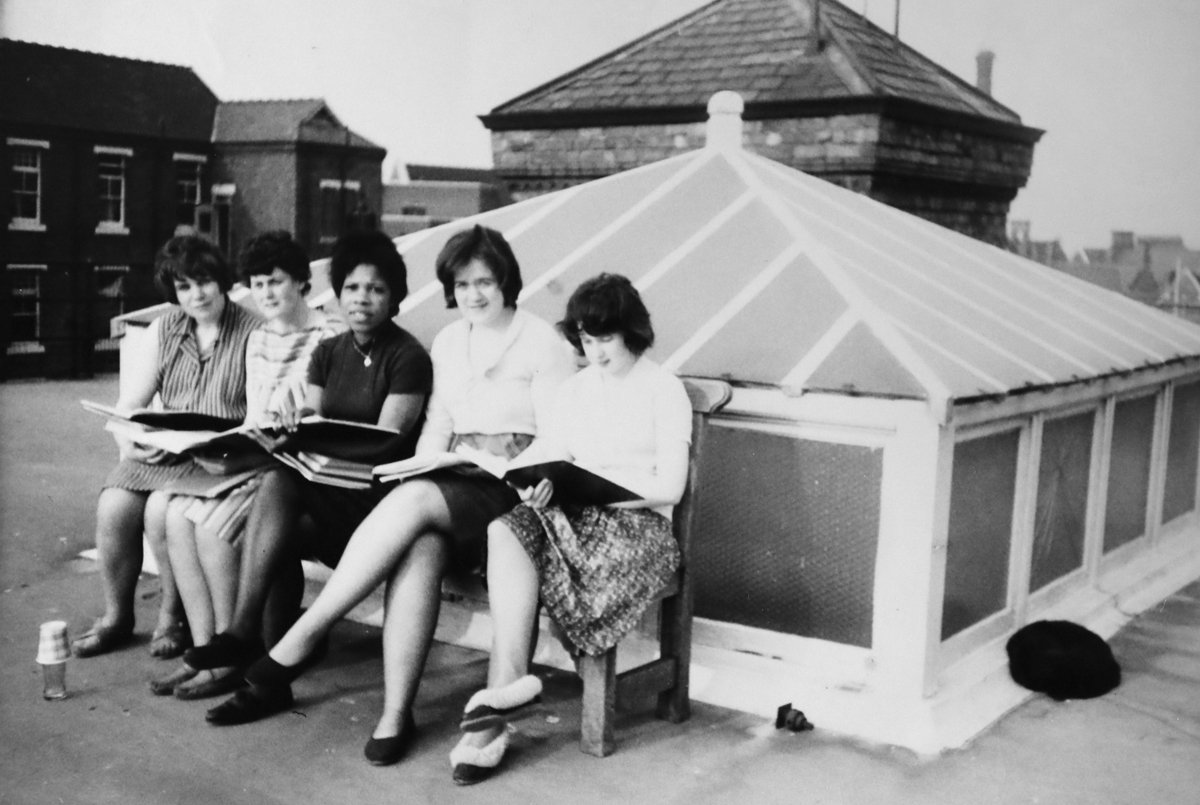 “I was 18 years old in the February and started training in March. That’s going back, over 50 years. I’m 71 now. I was a Cadet Nurse for six months before that. We were putting an album together for my son’s 40thbirthday, and while we were up in the loft we came across these photographs in the loft. People aren’t so interested in the past, I don’t think. It’s more for the future now, with all with technology that there is.”

(Photograph of Glenys at 19 (on left) with a patient on the ward, being visited by his grandson.) 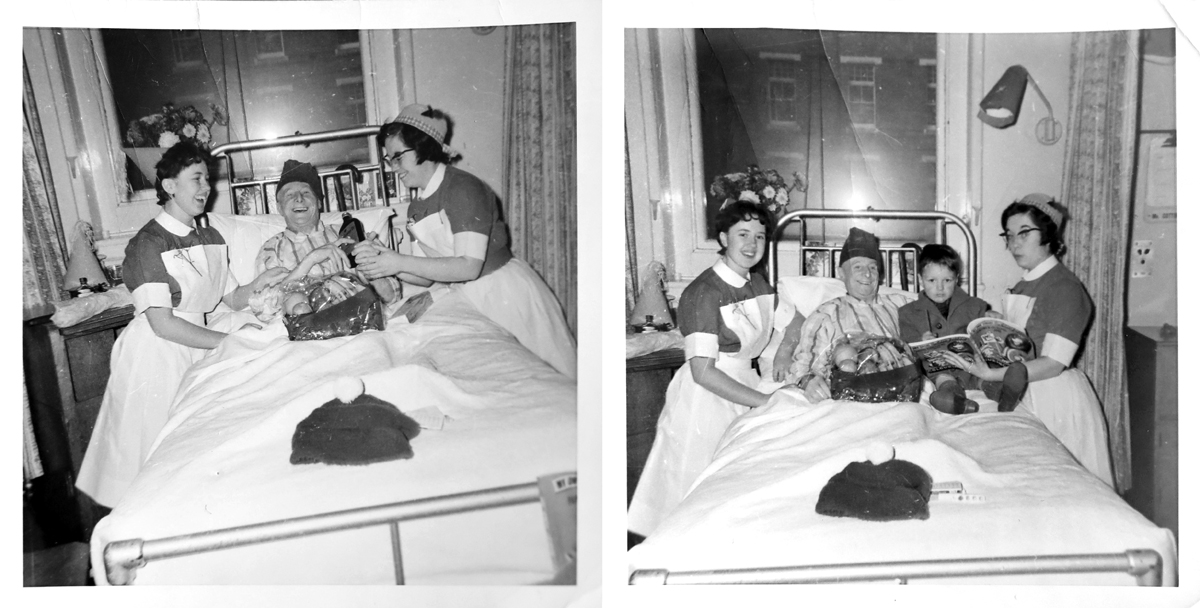 “This is me at home, my parents house in Handsworth. I could have walked home really from the hospital, but you had to live in the nurses’ home while in training. You weren’t allowed to live in your own flats like they do now. I went home weekends or on my days off.” 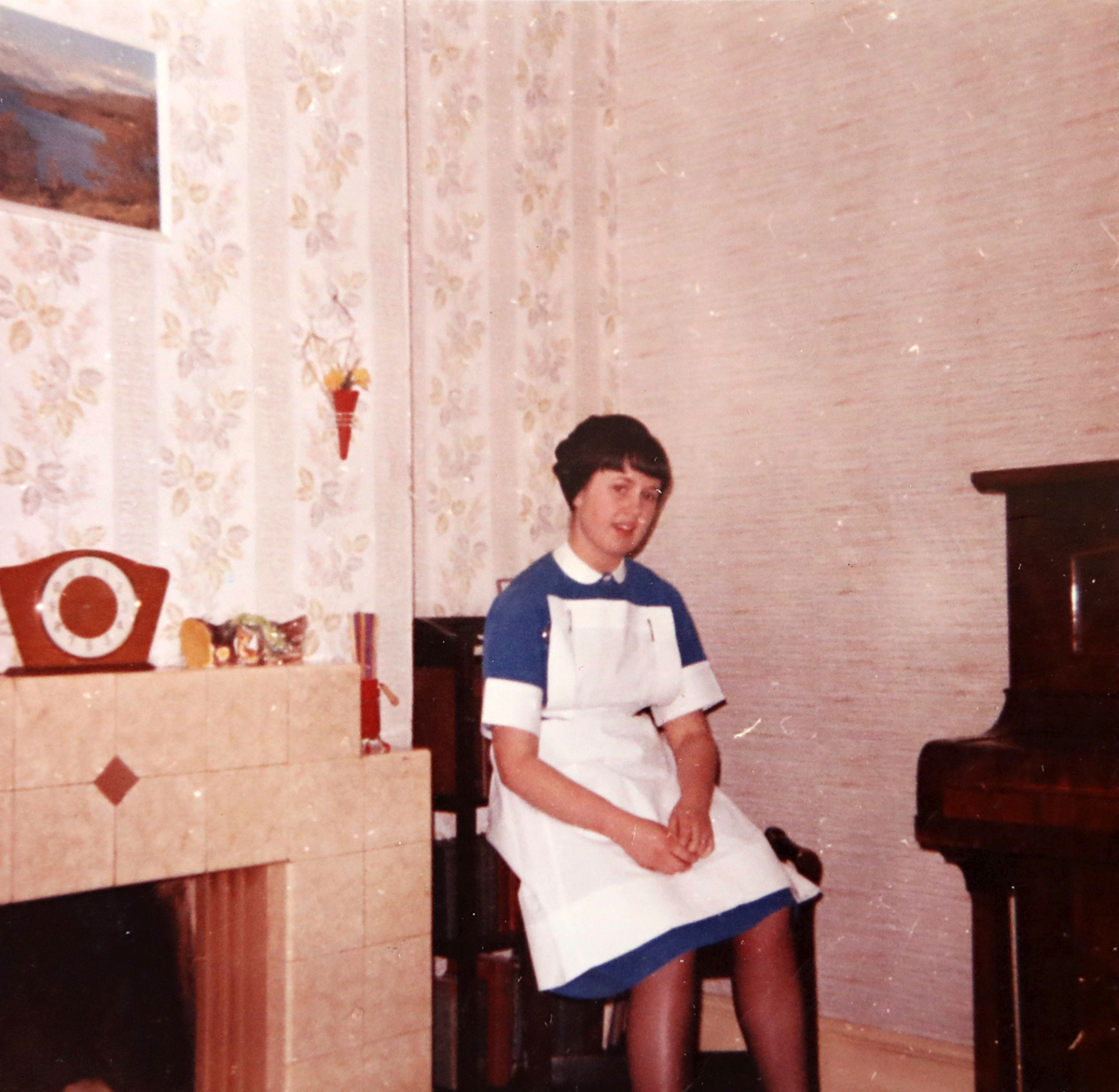 “We all lived together. We had some great times. You had to do three months preliminary training, and we were all based in these dormitories at the front hospital. We all had our own rooms, but the walls didn’t go all the way up to the ceiling, so you could hear everybody over the top. We had a television room and we always went to watch ‘Top of the Pops’ together. I was an only child – I never had brothers of sisters –  so I loved it because we were all together, sharing things.” 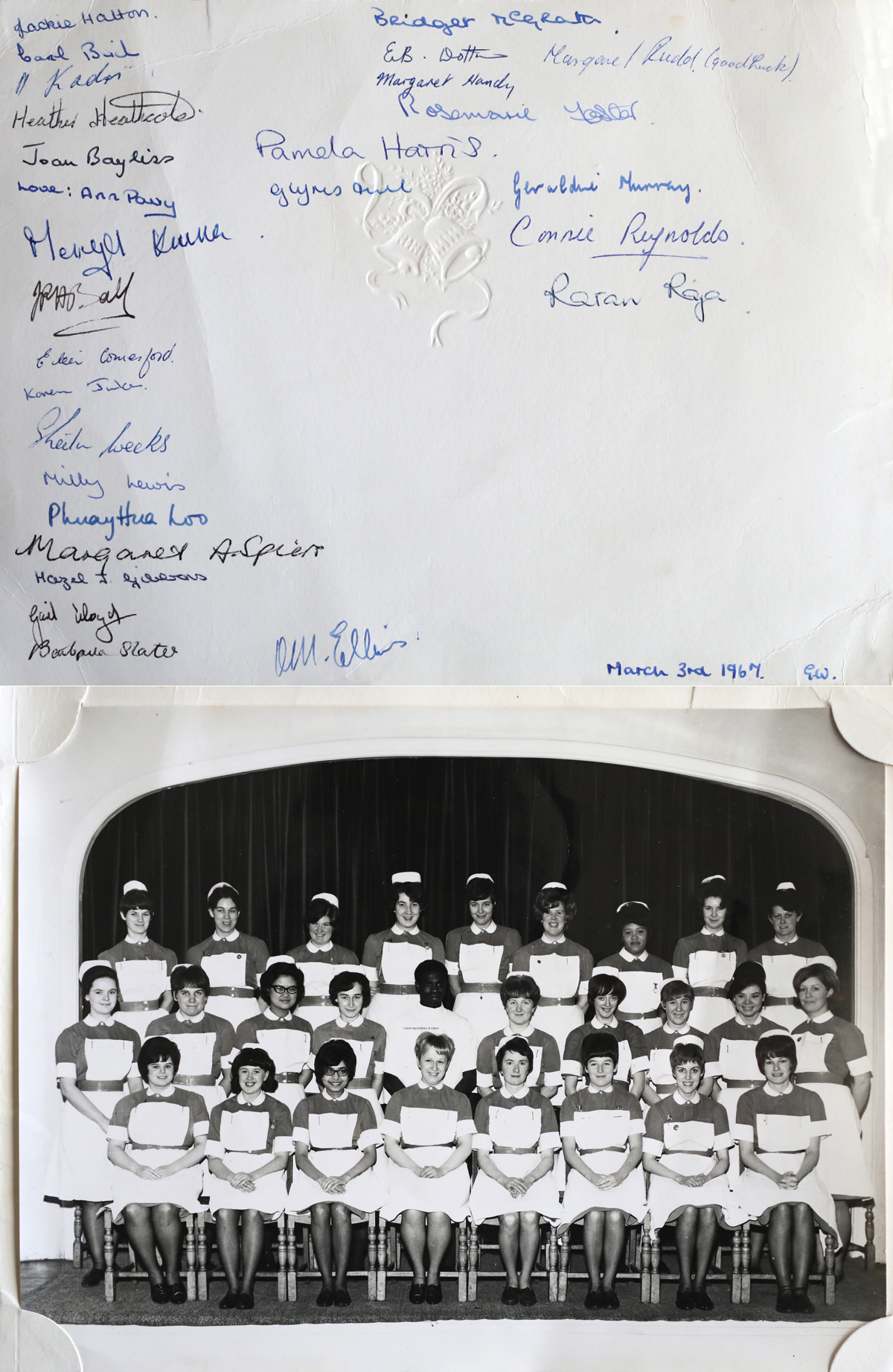 “We loved our cloaks, dark navy cloaks with a red lining. They don’t have those now.” 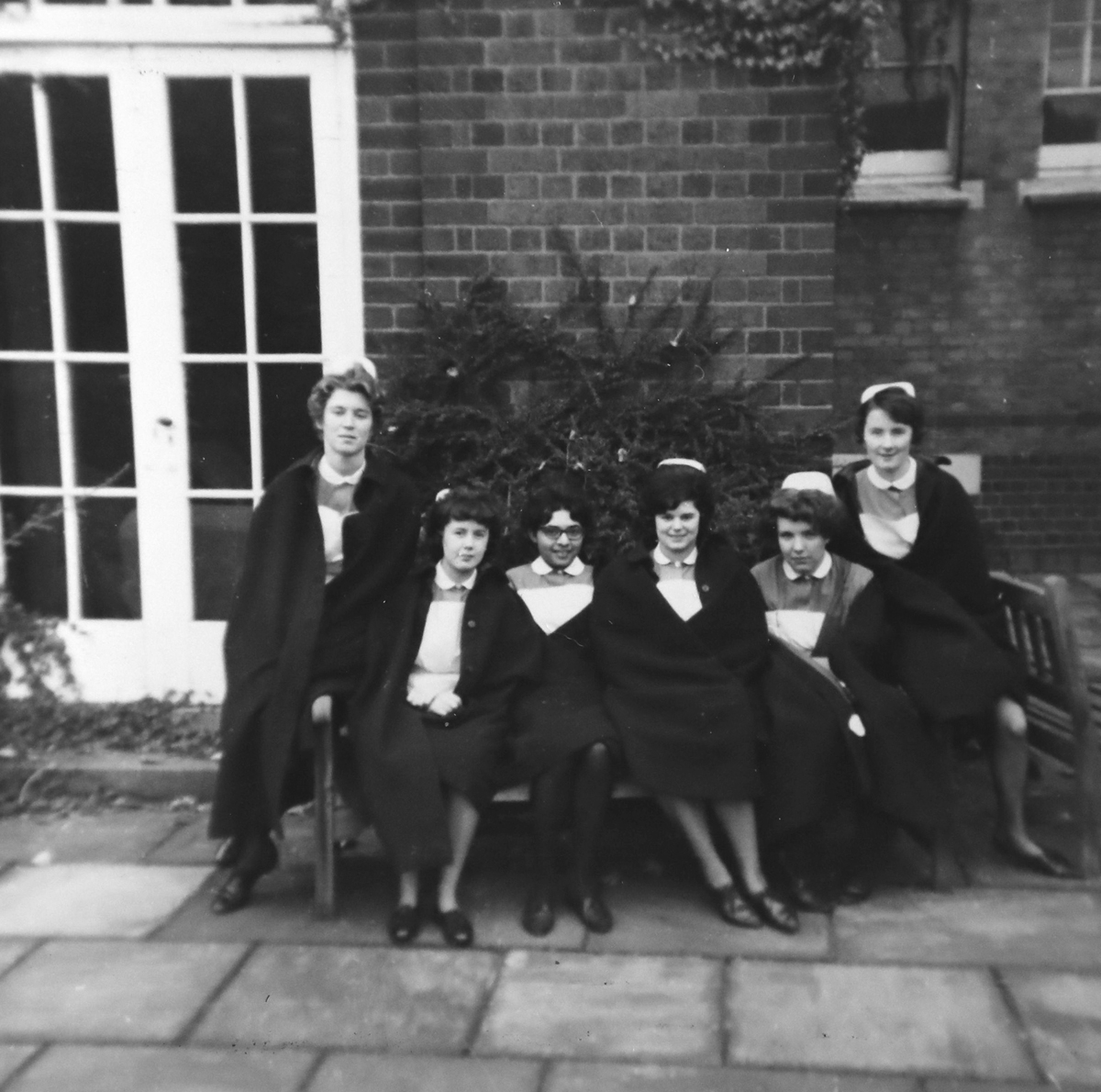 “The orthopaedic ward was on the ground floor and called A3. We had to go round over all the wards to get the experience when training and learn about the different types of problems. We practiced injecting oranges instead of patients, until we were capable of doing it. I liked the surgical wards better than medical. On the medical wards patients were in for a long time. I found it more interesting on the surgical ward because of the quicker turnover; they came in for their ops, got over their ops and were sent home, quite quickly.” 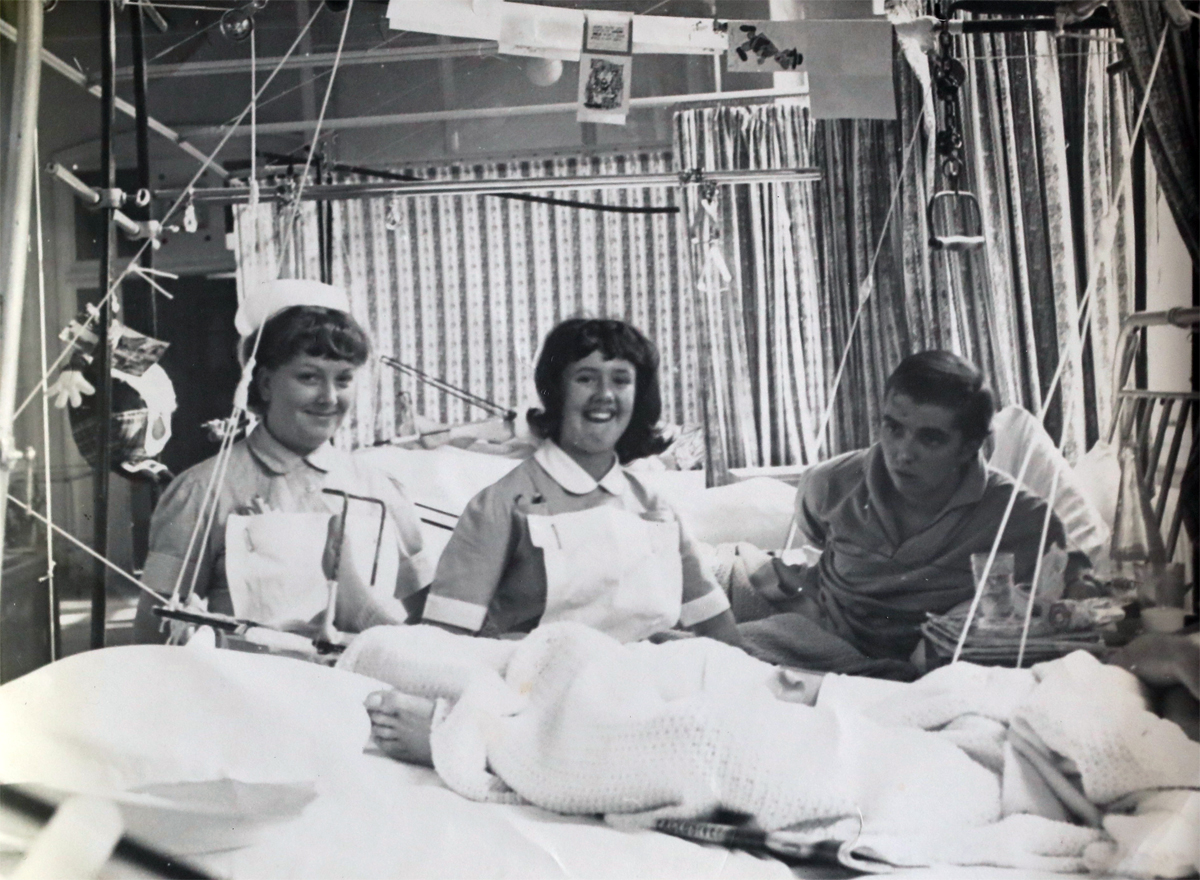 Example of one of the examination papers taken by Glenys in 1967; there was a practical part as well. 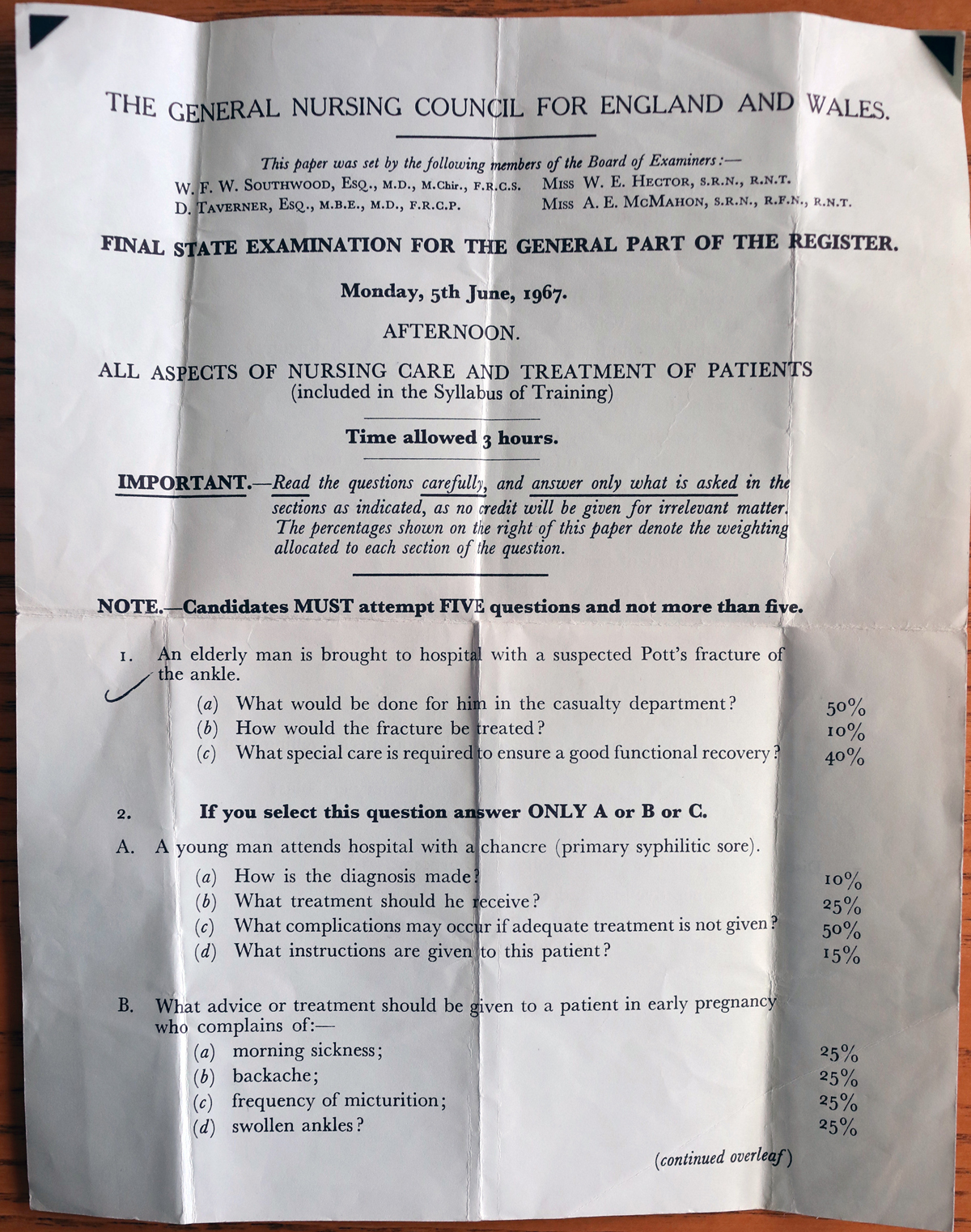 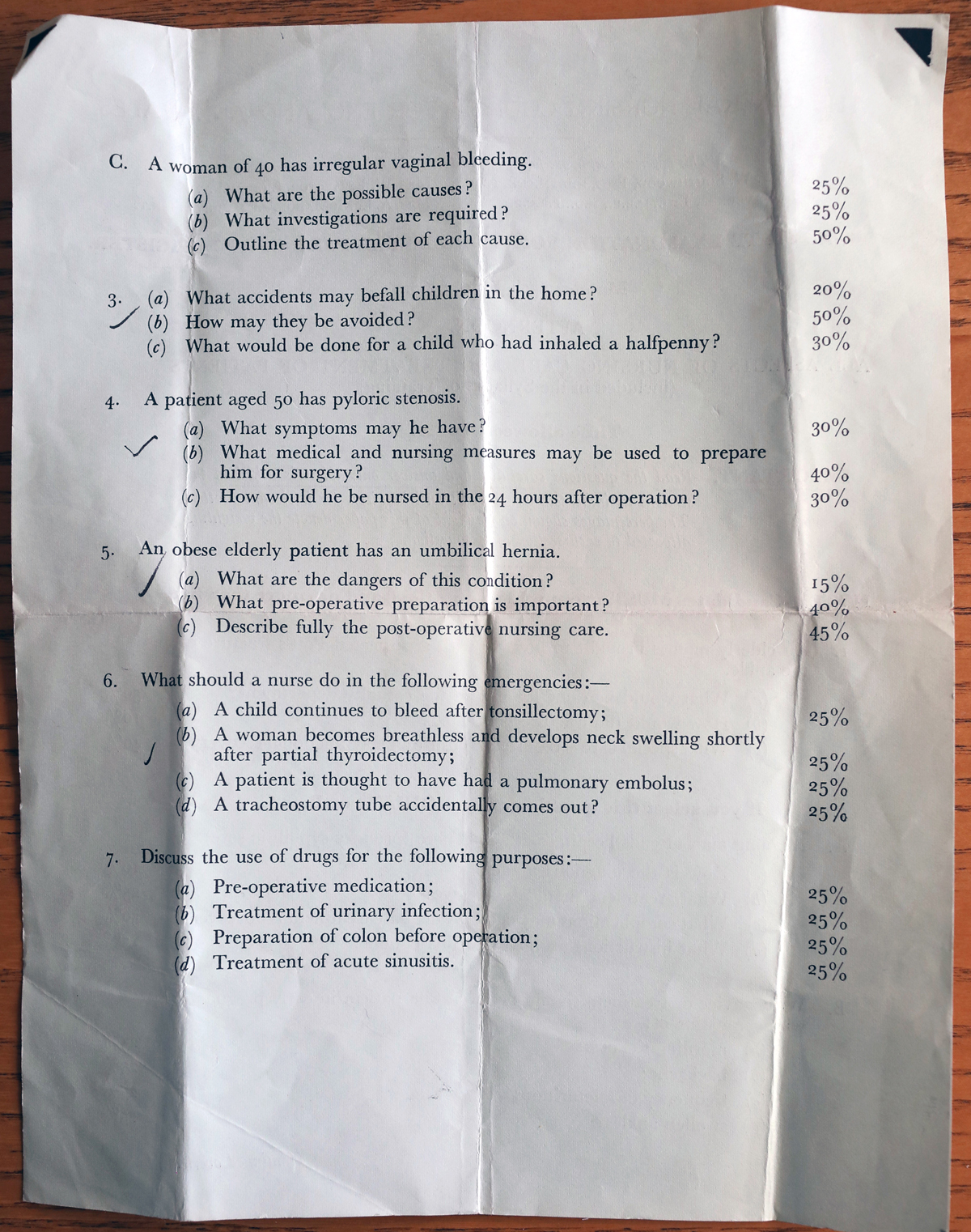 “I didn’t do midwifery – the main reason was because once I had qualified you got better money, as I was a Staff Nurse then. Had I gone onto to do a midwifery course I would have gone back to a pupil salary, which is useless when you’re trying to save up to get married. So I qualified at 21 and got married when I was 23. When I started, in 1967, my annual rate of pay was for 42 hours a week, in the scale of  £690-£850. You were allowed 5 weeks annual leave as a staff nurse.” 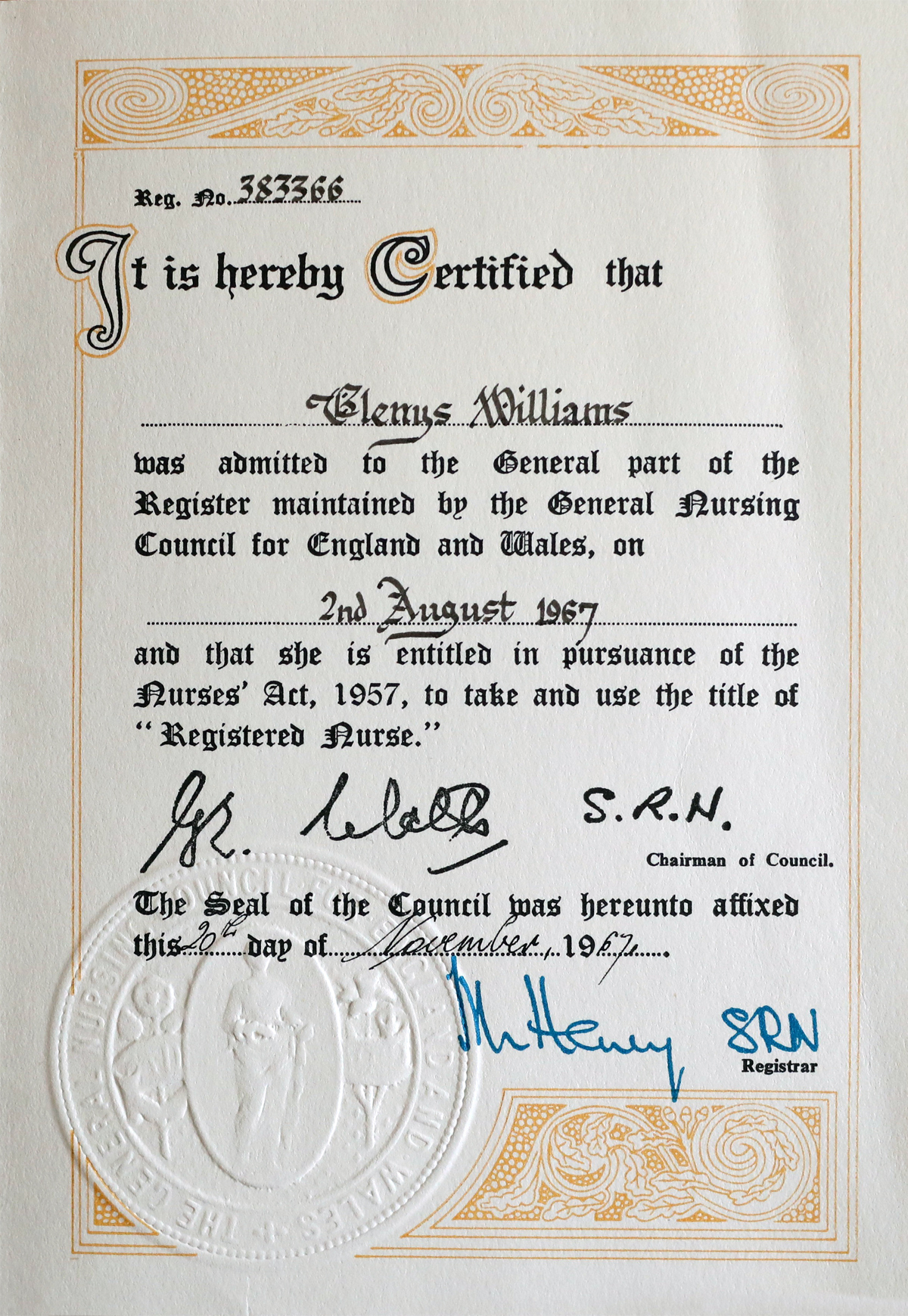 Glenys retired in March 2006. She is pictured here in the Outpatients Department at Sandwell Hospital with the Doctors, nurses and consultants she worked with. 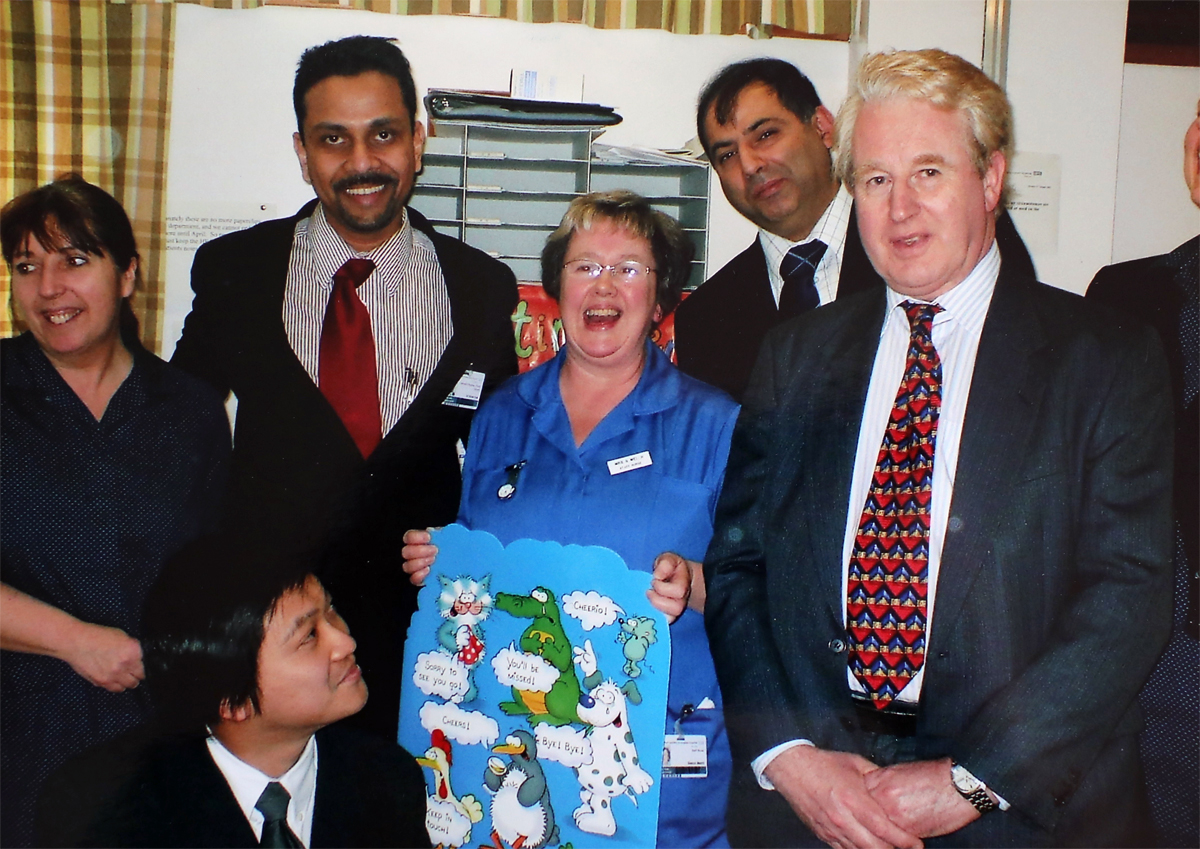