Memories of nurse training in the 1970s. 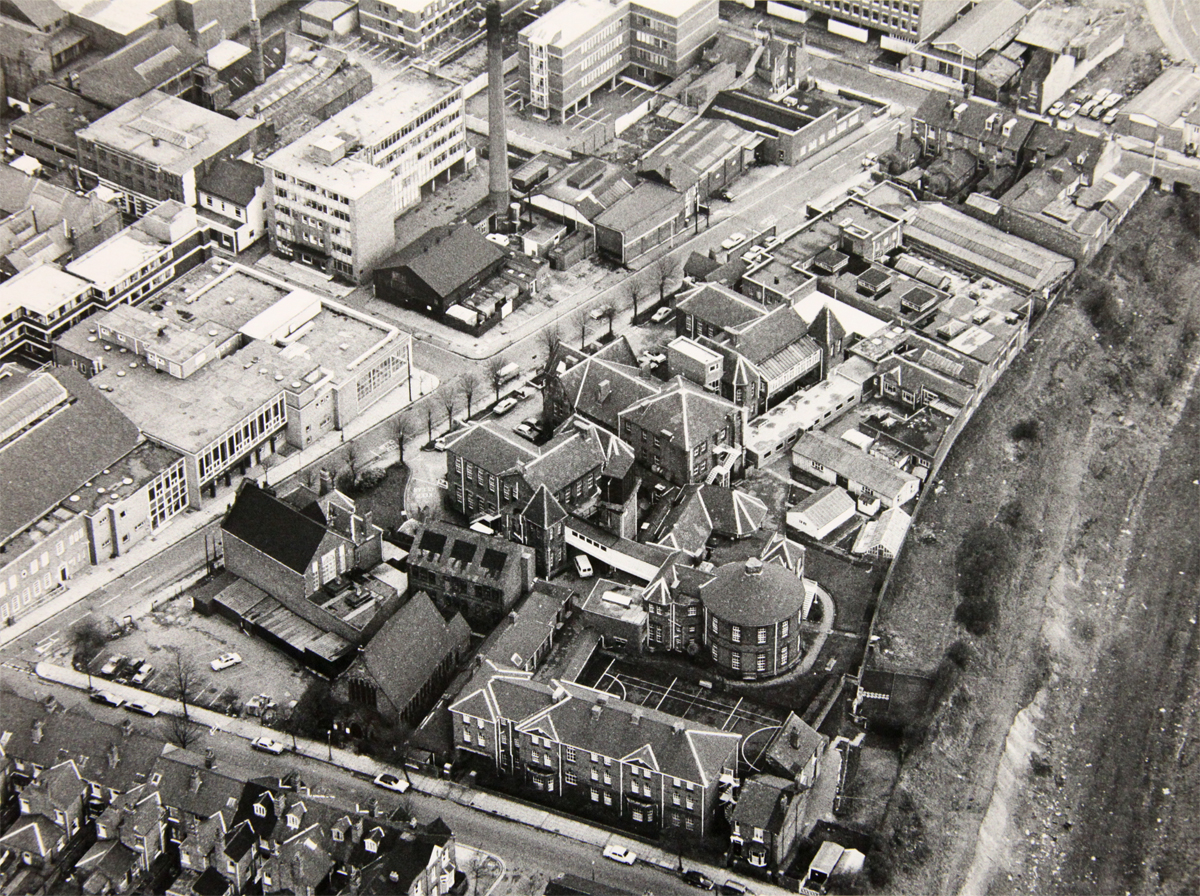 Photograph: Aerial view of the District hospital, possibly early 1970s since the railway (right) is no longer there.

“It started on a Sunday afternoon in September 1973. I arrived at the front of the District Hospital in West Bromwich with my mum, dad and uncle Jim who had driven us there, as we didn’t have a car. It seemed to take an age to get there. It was the first time I had travelled, apart from going on family holidays to Wales by coach or train.

We said our goodbyes in the hall then I was taken up to the nurse’s home with my belongings, where I was introduced to a few other newcomers, who mainly seemed to know each other already; they had been auxiliaries or cadets but they seemed a very friendly bunch. The Nurses’ Home at that time was quite strict, certain times for lights out, washing up to be done in a joint kitchen etc. A night sister plus a porter used to come round at first but then things changed and life became less strict.

On the Monday morning we were all bussed down to Hallam Hospital where we went to the school of Nursing. We were introduced to the tutors and us to them. It was all so different to school, I actually enjoyed it all, I learnt so many things. After the first month we had a wage. I went into Birmingham and bought a duffle coat from C&A. I still have that coat 45 years later – money well spent.

After 8 weeks we were allocated or first ward and shift rota. I was allocated Men’s Orthopaedic. All the staff were great and helped me a lot. I was a bit frightened when I came across my first dead patient, but I was told by the nurse that I was helping to just imagine the patient was still alive and just talk to them as if they were still alive. It worked!

The other first on this ward was giving an injection. On this ward we used to get injured players from West Brom and Aston Villa. After several attempts at trying too give a supervised pre-med the patient was jumping around and shouting. The staff nurse took it off me and said, “Don’t worry, you can give it him when he comes back from theatre”, which I did. No problems after rhat. I was on this ward over Christmas, the first time I had been away from home for Christmas. The Charge Nurse was so kind. Party food was set up for us in a side ward and he let me phone my uncle who lived a couple of doors away from my home, so my mum and dad could come speak to me. The second year I was on nights for Christmas.

After I finished on the ward we all met up again in school, talking about our experiences on the different wards, but we were back in school to learn more things before the next placement. While I was the district I was placed on female medical, male surgical, theatre and accident and emergency. All placements had different experiences. I was nervous going to the theatre but once there it wasn’t too bad. A & E was very exciting, you never knew what was coming in, anything from a finger splinter to a major road accident. All had to be dealt with. Like theatre, you for part of the team.

After spending some time in hospital recently I do think that nursing has changed somewhat! Nowadays I don’t think the nurses really get to know their patients. In our the first year it was the student nurses who cleaned the patient’s tables and lockers, a great opportunity for talking to the patient; you often picked up on things that the patient hadn’t told the doctor.

Another of our duties was to wash out and clean the bedpans, great for a few minutes to chat with your fellow nurses! In our days all beds were made with ‘pristine’ hospital corners. Matron used to do her rounds daily, all clutter had to be cleared from the ward, us juniors out of the way or looking busy, a nurse would be sent to next ward ward to warn that the Matron was on her way.

Another thing I remember is a great big porridge pot that was cooked overnight! Yummy! I’ve tried but I’ve never found anything like it. On the social side I made many friends nursing, I still keep in touch with a few even now. We used to have parties in the nurse’s home or just have a natter while studying. One friend introduced me to Horlicks made with condensed milk, now that was something. I can honesty say those few years of some of the best she’s my life and taught me many life skills.”