Lavender’s is believed to be the oldest family-owned aluminium foundry in Britain.  It was founded by John Herbert Lavender as Woden Aero Foundry on Stafford Street, Wednesbury in 1917 to supply components for the booming motorcycle and car industry in the Black Country and beyond – it was estimated at one point that almost every motorcycle produced in Britain featured a Lavender casting somewhere in its construction.  The firm was so successful that in 1931, they opened a brand new, modern foundry at the corner of Crankhall Lane and Hall Green Road.  They continued to produce castings for all sorts of uses, including parts for British Seagull outboard motors, IBM typewriters, Black & Decker power tools, BOAC aeroplanes, Lucas fuels and much of the booming motor industry – including the famous Reliant cars. 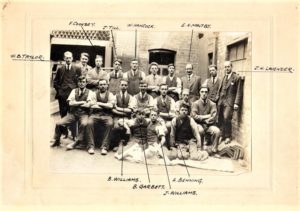 J.H. Lavender was always personally involved in the business – he was a lay preacher at Spring Head Methodist Church in Wednesbury, ran prayer meetings for staff and provided hot cross buns for everyone at Easter.  Lavender died in 1957 but his legacy continued to grow – the foundry added new pressure die-casting machinery to its traditional sand casting capacity and have continued to produce aluminium castings for the motor industry to the present day.

“The Black Country Living Museum is seeking memories of Lavender’s aluminium foundry in the 1940’s to 1960’s to inform our translocation and recreation of it in BCLM: Forging Ahead.  Upon completion visitors will be able to experience life and work in a post-war foundry, with regular casting demonstrations.  We will also be telling the social history of industrial work in the Black Country.  Faced with a desperate labour shortage after the war, Black Country businesses recruited workers from all around the world to enable their foundries, forges and factories to operate to full capacity.  Like many foundries in the region, lavender’s employed foundrymen from the Caribbean, India, Pakistan and elsewhere, providing work and a home for a generation of Commonwealth citizens.

In order to do this, we need the memories of those that knew the foundry best.  We would be very grateful if they could get in touch with us by emailing collections@bclm.com or call 0121 557 9643.”