"Hi. Hi. Shall I see you at the Middle Lock next Sunday" he would cry as he walked around the streets of West Bromwich.

An evangelist whose fame and reputation spread throughout the Midlands.

John had a natural gift of eloquence and oratory but also used unorthodox methods to get his words across.  He knew how to engage with the local people who were drawn to his open air sermons in great numbers. Born in Tipton on 1st February 1817 in humble circumstances, his father Thomas was a Wesleyan class leader, something John would also do.

He started work at the age of eight which was quite normal in 1826 when child labour was common in all the industries of the Black Country. He worked firstly in the local coal pit and then as a puddler in the ironworks but his ambition was to qualify as a local preacher. He made up for his lack of early education by home study and at 20 he was enrolled as a Wesleyan local preacher by the Rev. John Hicklin. At the age of 21 he began to officiate in the Wednesbury circuit then moved to West Bromwich and became associated with the High Street Wesley.

It was through Mr. Thomas Bagnall, well known ironmaster and ardent Wesleyan and Lord Calthorpe of Perry Hall, Perry Barr that he became a home missionary to boat people. These people lived on their boats in deplorable conditions and because of their constant movement they were unable to attend chapel services.

Midway between Spon Lane and Bromford Lane there was a middle lock which connected two canals where they converged at different levels. It was a bleak landscape with spoil banks from the numerous collieries. One Sunday as he was distributing tracts in Spon Lane, John found himself in the middle of a large gathering of typical colliers and ironworkers engaged in dog-fighting, whippet racing, cock-fighting and gambling. He was alarmed at what he saw and instead of inviting them to come to a service in a place of worship, he announced that he would return on the following Sunday morning and hold a service right there. He kept his promise the following week and each summer (May to August) for the next 29 years, preaching from a portable pulpit. Attendances ranged from two to three thousand and up to as many as twenty thousand. People came from a wide radius walking many miles to get there. 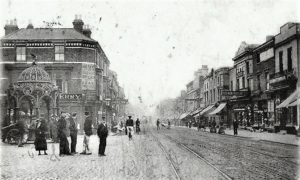 When the services were at the height of their popularity, John and his band of followers would assemble at the fountain in Dartmouth Square singing their rallying hymn, ‘Let Us Gather at the Fountain’, and form a procession to the Middle Lock headed by Brettel’s Band (associated with Brettel’s Foundry) in Spon Lane.

“This morning being very fine, I had the largest congregation I have addressed in my life. Such a sight I never saw before. Thousands worshipped God in the open air. It was a vast multitude of rich and poor, old and young, well-dressed and ragged, drapers, grocers, butchers, tailors, publicans, beer sellers, ironmasters, clerks, magistrates, puddlers, coalmasters, mine agents, “butties”, “doggies”, colliers, navvies, boatmen, roadmen, labourers, sweeps, a goodly number of Frenchmen from the Glass House, the aged and the infirm, the lame and the blind, men of all creeds and of no creed at all.”

The services continued until 1890 when they had to cease owing to the Canal Company making alterations to the land which rendered it unsuitable for the purpose.

John also officiated in many Wesleyan Chapels, was chaplain to the Nonconformist side at the West Bromwich Cemetery and for a long time had charge of the local distribution centre of the Bible and Tract Society in High Street. In recognition of his work he was presented with an illuminated address at the Town Hall in 1873 (organised by a committee led by Reuben Farley) together with £230 subscribed by the community. In 1876 he also received a presentation from the Board of Guardians in appreciation of his ministrations to the inmates of the workhouse.

John Skidmore died at his home in Tildasley Street on Saturday January 28th, 1899 aged 82 and was buried in Heath Lane cemetery.

He and a group of followers would gather at Dartmouth Square singing "Let us Gather at the Fountain" before walking to the Middle Lock.