Founded by John Arthur Kenrick and Frederick Thomas Jefferson in 1878, when they bought the Free Press newspaper to help promote the cause of Liberalism. 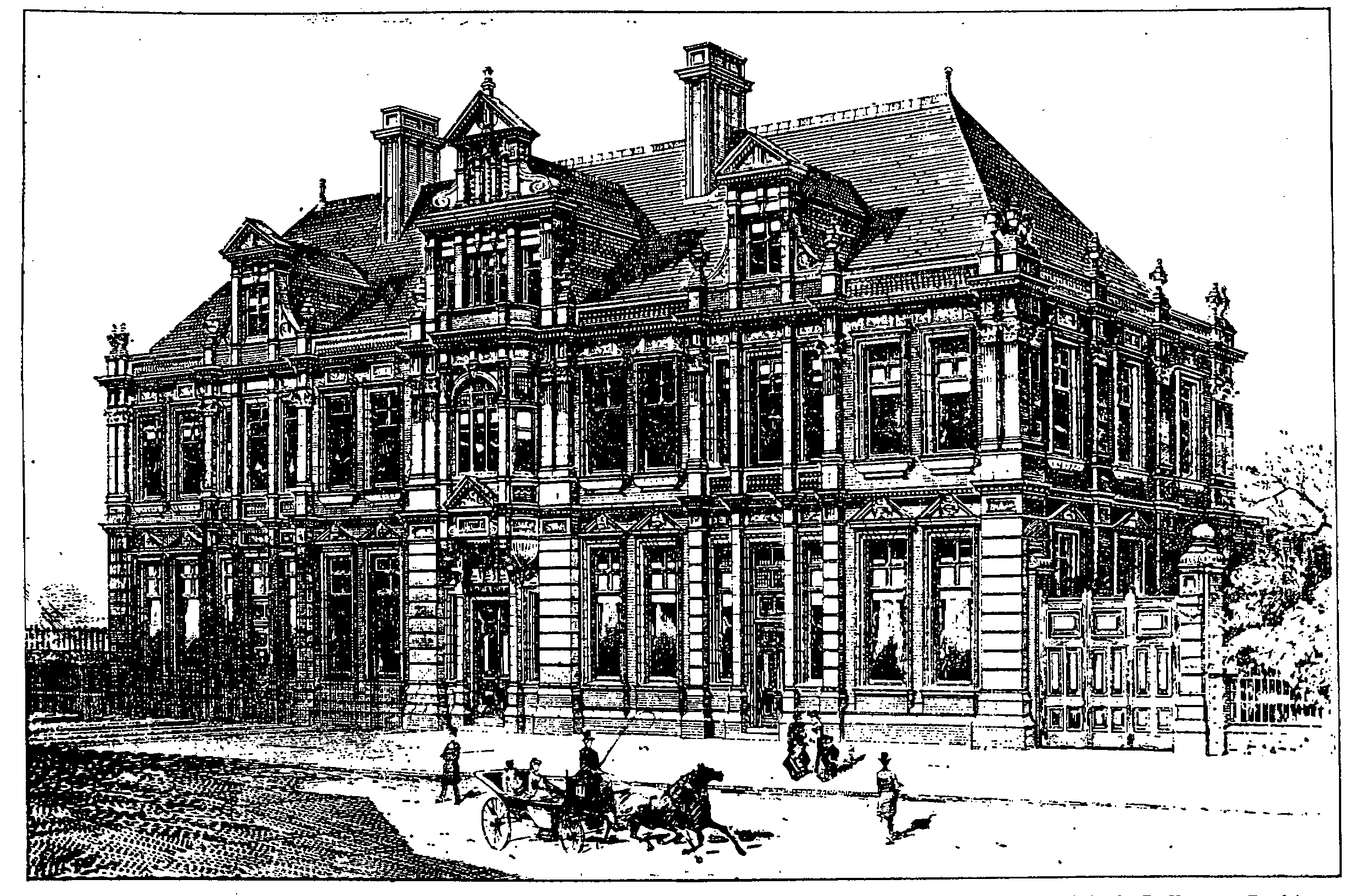 The façade of K&J printers on the High Street was a familiar landmark to local people, with its large imposing red-brick exterior.

John Arthur Kenrick was the son of Archibald Kenrick, who started the iron foundry Kenrick and Sons, was a Director of Lloyds Bank and the Chairman of the local Liberal Association. Frederick Jefferson was a soliticitor’s clerk and also an ardent Liberal. They changed the name from Free Press Company to Kenrick & Jefferson in 1885.

The façade of K&J printers on the High Street was a familiar landmark to local people, with its large imposing red-brick exterior, which did little to reflect the work undertaken daily within its walls.
By 1897 an offshoot of the printing and publishing business, the Envelope Department, had begun to expand significantly in its own right. Also in 1897, the huge Binding Department was set up, covering an impressive 13,940 square feet.
Bill King offers these memories in 1999.

A week before leaving school, in April 1943, `I called at K & J’s and saw Mr Gibbs in the time office and said I wanted to join K&J. He sent for Frank Armstrong the Letterpress Manager who said I could start on Monday at 7.30am. ‘Bring overalls.’ About a dozen of us 14 year olds assembled in the time office, the girls were taken into the Binders and spread around the various sections. The boys were taken to Harry Thornhill in the foundry for the task of washing ink off rollers until after a few weeks or months we were moved to other departments.

It’s not mentioned much, but I was very aware of the different smells. In the Compositors Room it was the smell of metal, in the Printing Rooms the ink, and of course, in the Binders the glue. You got used to it in time, as well as the noise of the machinery, when you then raised your voice to compensate.

The main Printing Room containing about 100 machines stretched down to the High Street where large windows gave passing folk an opportunity to look and see the actual printing taking place. Over the years there must have been thousands of parents who lifted their offspring’s to gaze on the activities within. Christmas time was very impressive as a few weeks beforehand, the girls waiting their turn for their next hand-feeding stint proceeded to make Christmas decorations from unwanted sheets of paper, which were stocked in a very wide range of colours. These streamers crisscrossed the whole length of the room and so looked very festive from the street. Other departments followed suit but alas a few years later it all came to an end. Insurance said ‘a fire risk’.

At around 3pm on Christmas Eve the work of all departments ceased and employees from others departments gathered around the machines in the letterpress room. George Plant appeared on the staircase leading to the offices with his piano-accordian. The Minister came in from the nearby church, K & J’s songbooks were produced and a Christmas carol service took place for half an hour or so. Very emotional. After all, it was wartime. 310 K&J personnel were in the forces at some time during the war, 15 of whom died, as well as many more wounded and taken prisoner. We all knew someone. We ten departed for the break, four days off including the weekend. I remember the Christmas present from the firm: a small quantity of orange notepaper with some blue envelopes.

I would have like to have been an apprentice printer, but as no apprenticeships were available at the time and being 16 I moved into the offices, and was then put in with Charlie Culwick who was the Factory Manager. He had an enormous workload, being responsible for getting the orders out on time. Just impossible, with the number of orders about the continual paper shortages. Two things stand out. Each day being notified by the Envelope Factory how many envelopes made – i.e. 20,000 Snowflakes 61/2’s made and then rationing them out, 500 here, 1000 there, to part supply orders that had been in hand six months. The early part of 1947 brought chaos. Deep snow, no fuel, the country virtually grinds to a halt, the factory closed. I recall going to the deserted Die-stamp sorters, locating work that had been stamped and was drying, gathering 50 together and posting them off to satisfy the customer.

Communications have altered. We sent and received telegrams. In order to phone outside K & J’s you first had to ring Ethel on the switchboard, who would get you an outside line eventually. Despatch and transport of goods also caused headaches. Try telling a customer who has waited 6 months that his order has been sent L.M.S. Goods (a horse and cart collected the more heavier goods daily). Once the railway had got hold of it many weeks would elapse before it surfaced.

The Wharfdale Social Club in Bratt Street was ideal for us younger ones – a table tennis room was used a great deal. There was also a snooker room with two first-class tables, a bar and a live-in Steward to keep control. There were K & J’s billiard and snooker teams very successful locally over a number of years.  The end of the war meant the Sports Field and Pavilion at Salisbury Road was available again. The snag was, no permanent Steward there, but nevertheless in addition to tennis courts there was a bowling team, as well as netball, cricket and football teams. Other activities were a Thursday night youth club and an Old Time Dance on Saturday nights, and a occasional Open Day or Bonfire Night.

At one time a weekly news sheet was issued informing us of any newsworthy items and a pre-war news sheet was also issued. It appeared to be mainly the results of matches that had taken place the previous day in the Wharfdale or the sports ground. I like the story that had been told to me by the man who was appointed referee for the darts competition. The finalists were a man who was stone-deaf and had to lip-read and the other was a man who stuttered. Both like to argue and the referee said it was the most frustrating evening of his life.

The canteen had been a good stalwart over the years. When I went first, there was a staff area and the other part was for factory workers. Mrs Clarke was in in charge. Boys and girls could not sit together. Food was still rationed and the highlight of the week was when we had egg and chips. Its fortunes varied over the years, but on the whole it was good and at times really good.

Bill King was interviewed by Ray 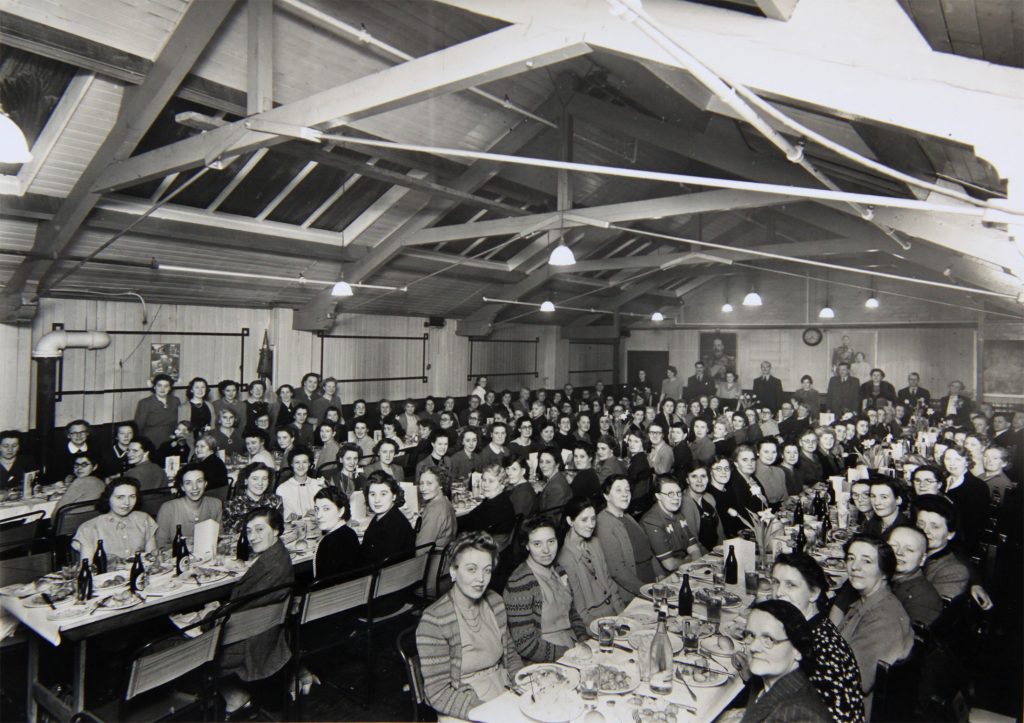 310 K&J personnel were in the forces at some time during the war, 15 of whom died, as well as many more wounded and taken prisoner.