The cemetery was first opened on the 16th January 1859 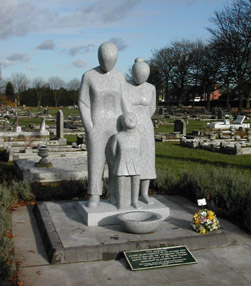 Burials at the public expense are not allowed by law to erect a headstone or marker.

The first burial being a Thomas Llewellyn, aged 21, a miner killed in an accident.

On 24th January 1859, the first recorded burials of individuals whose ‘Late Residence’ is listed as ‘Union’ took place. ‘John Charles’ aged 18 years and ‘James Hill’ aged 55 years: buried in graves No. 3 and 5 respectively.

The number of Union burials taking place during the opening years are:

The type of grave used for ‘Union’ burials is termed a ‘Public Grave’. Then from December 18th 1860 the majority of graves were termed ‘Common Graves’, irrespective of whether they came from the Union or not.

From January 1874, for the first time, the terms ‘Common’ and ‘Public’ are both used to describe a class of grave. It would appear that the term ‘Common’ applied to any purchased grave which was not a brick grave, whilst ‘Public’ referred to graves which were not the exclusive rights of burial were not purchased.

This is supported by the fact that the burials as being from the ‘Union’ where buried in ‘Public’ rather than common graves. Burials at the public expense are not allowed by law to erect a headstone or marker hence we cannot see where an individual has been buried.