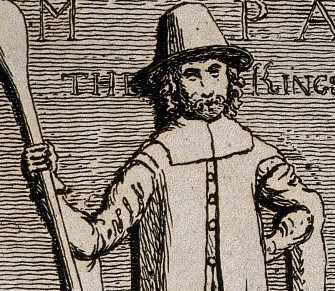 A Tall Story from West Bromwich

“For a tree to become tall it must grow tough roots among the rocks.”

When the German philosopher Nietzsche spoke these words in the 19th century, he could almost have been making reference to a little known individual that centuries long gone appear to have forsaken.

Walter Parsons was born in West Bromwich in about the year 1600, his family living in the All Saints area close to Wednesbury. Like many of his fellow townsfolk and descendants yet to come, his labour was both hot and uncomfortable. He was apprenticed to a blacksmith and no doubt he must have thought his life would have continued in that or a similar industry until his days passed; however, like many things in life the unexpected is less rare than one may at first realise.

At this point in its history, West Bromwich was a very small, agrarian based village populated by probably less than 1,500 inhabitants. Anyone passing through it may well have not given it a second glance and carried onto their original destination, the town forgotten in a trice. Walter however was fated to change this; he was to be noticed and unavoidably so. His physical presence was such that wherever Walter went he was sure to be pointed at or remarked upon. He is said to have reached the dizzying heights of 7 foot 7 inches and it was his stature that irrevocably changed his life and eventually took him away from his Black Country roots to the bustling and flourishing city of London.

It is said that he was so tall that in order for him to be made as equally proportionate to his work mates his employer had a hole   dug in the ground for him in  which he stood up to his knees so that he could continue his work at the anvil and saw. This sight must have been more noticeable and remarked upon perhaps than that statuesque demeanour which marked his daily life. This appears to have been the case when one day – so it is said – the Earl of Buckingham was travelling through Staffordshire and found himself in West Bromwich, his horse pulling up injured; it was here that the Earl witnessed the above surreal scene with no doubt mouth agape and eyes on their proverbial sticks. Once the Earl had composed himself he must have trod slowly if not a little fearfully towards Walter with the idea that this 17th century Goliath would make an excellent bodyguard for the reigning monarch of the day, King James 1st. It is believed that it was there and then he offered Walter the job on the spot as ‘porter’ to the King.

The story however does not end there. Walter was reported to have been particularly skilful with the yo-yo and whilst he continued his dialogue with King James an assassin attempted to murder the monarch; Walter upon witnessing this immediately threw his yo-yo and captured the assassin in question. Naturally, James felt it was now his duty to show mercy upon where his mother was duly released. 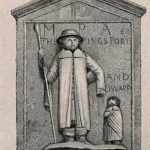 Drawings and other depictions of Walter cannot accurately confirm his towering presence but according to the English naturalist Robert Plot and author of ‘The Natural History of Staffordshire’, a picture did once exist of Walter in the Guards Chamber in Hampton Court Palace and maybe another at the Pope Head’s Tavern in an alley of the same name (now believed to be Chancery Lane in London). Those that are ascribed as images of Walter should therefore be approached with some degree of scepticism.

Walter himself, it is said, continued his life with dignity and valour, stories suggesting that he went on to serve King Charles 1st for a short time. He did not allow his physical grandeur to take advantage of or coerce others; however, on one occasion upon walking the London streets, Walter found himself affronted by a man of ‘normal stature’; he simply picked him up by his waistband and placed him on a hook from where he hung for all to ridicule him. It is believed Walter’s short time on Earth ended around 1628. A short life but one which had not gone unnoticed by those he had encountered.  Considering the trials and tribulations that Walter had experienced it would not be ill conceived to bestow the epithet of Gentle Giant upon this, one of the most remarkable of characters whose roots originated in the heart of West Bromwich.

From “The Story of West Bromwich” by W.A.Aston the epitaph to Walter reads:-

“Beneath this mossy surface lies,

A Philistine of wondrous size;

At Bromwich born, he won renown,

For greatness up in London town.

A porter at King James’s call,

He was a man both stout and tall.

Parsons by name, he ere was seen,

A head and shoulders o’er the dean.

And e’en the bishop with his see

Was not so great a man as he.”

All Saints West Bromwich giant blacksmith porter to the king