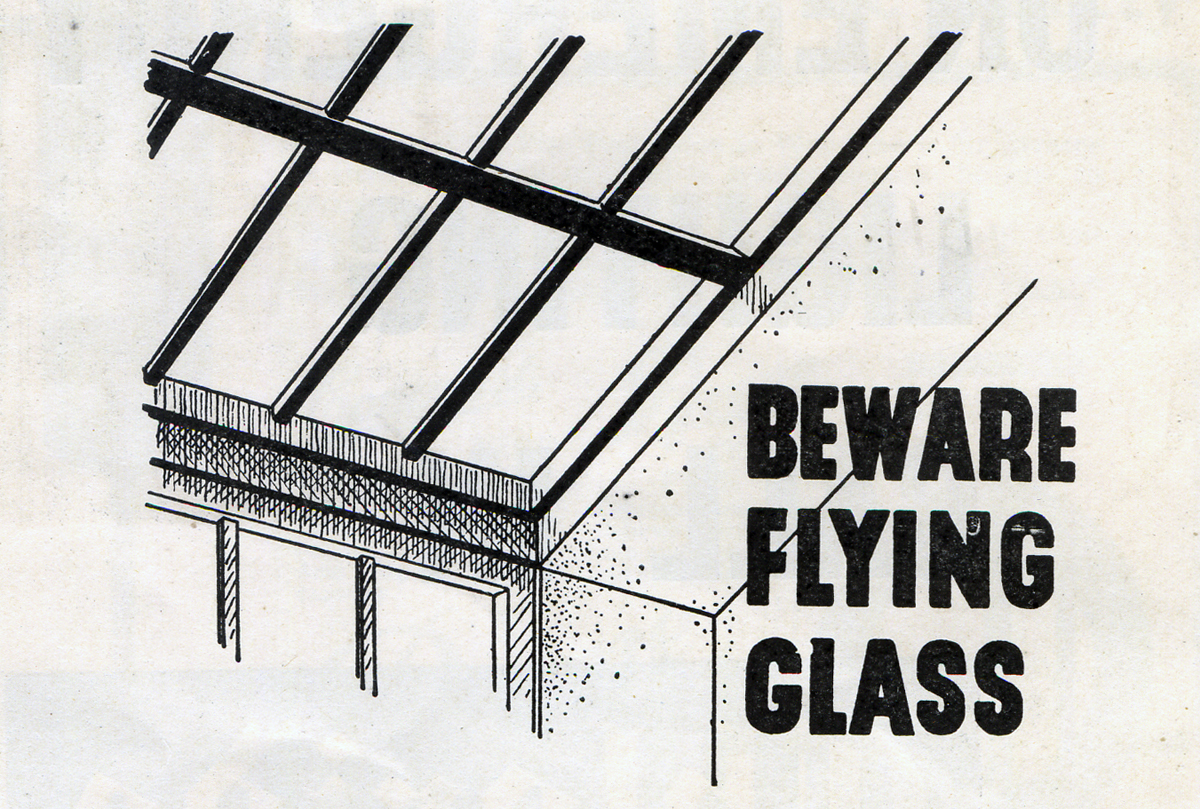 At a full meeting of the Council of Management held on the 2nd December, 1940, it was unanimously resolved to place on record the feelings of profound admiration and pride with which the members had received the details of the magnificent courage, ability and team spirit shown by every single member of the Staff in dealing with the serious enemy air raid on the night of the 19th November 1940.

The Council of Management fully realize that the evacuation of the 91 patients without loss of life, and the prevention of total demolition of the Hospital by fire, was entirely due to the almost incredible bravery, devotion and disipline of all concerned.

A few weeks earlier, on 19th November 1940, West Bromwich suffered its worst air raid of the war, which killed over 50 people. The District hospital in Edward Street was badly hit. The sirens in West Bromwich sirens sounded at 6.53pm. It was the 185th warning.

Bill Markham, aged 14, had recently started work at PEL, part of Accles & Pollock, earning ten shillings a week. He was diagnosed with pleurisy and admitted to the District hospital at lunchtime on 19th November. He was placed on one of the ‘round’ wards. The incendiaries dropped by the planes caused widespread fires and heavy explosive bombs destroyed part of the hospital. All the windows were shattered. With large fires burning on two sides and the railway embankment blocking any exit at the rear of the building, single-handedly the Matron puts out incendiaries in one block. Despite the rubble strewn across the roads, incredibly the hospital was evacuated in less than 70 minutes. One of 91 patients, Bill was taken away to safety at Hallam Hospital in a converted bus ambulance. The stretchers used were made of two steel tubes with a bracing piece between them and covered with a wire mattress. These very stretchers were made at his place of employment. He was later told that Hill & Longs furniture warehouse, on the other side of the railway line, was hit and a piece of metal girder travelled through the air as far as the hospital, falling right through the roof of the very ward he was in. Once at Hallam he was put in the veranda outside the main ward. The ack-ack guns at Stone Cross and Hill Top golf course were firing constantly, creating a terrific noise. Pieces of shrapnel rained down with a rattling sound on the glass roof of the veranda.

Dr William Walton, the Medical Officer of Health for the town, was standing with the 53-year-old Matron, Miss Evalyn Gertrude Thomas, in a corridor discussing the situation with the fires when three high explosive bombs hit. The blast threw the both of them in different directions. In front of him, the corridor caved in and debris fell all around. He later told a reporter,  “The Matron was magnificent. Despite this gruelling experience she carried on unperturbed with her work and superintended the evacuation of the hospital with the greatest efficiency.” Indeed, the Matron picked herself up and set about the evacuation. After they dealt with the patients, the staff then went back to into the blazing hospital to bring out bandages, dressings and drugs. Anything capable of being carried they took away to a place of safety. Only three nurses were wounded and three patients suffered minor injuries, two from fragments of glass. Miss Thomas returned to work in the morning and insisted that the Union Jack be raised above the shattered hospital. For their work that night the Dr. Walton and Miss Thomas were both awarded the George Medal, receiving their award from the King at Buckingham Palace on 17th June, 1941.

Alma Broad was on messenger duty that night. “As the bombs came down they made a sort of whistling sound. We used to count to seven, when we got to seven we said, That one didn’t have our name on. Dorothy and me were going back to our post. We were in the High Street on our way to Moor Street to get back to B9 when we heard this explosion, then another, these seemed to shake the earth; they were different to other bombs. We found out they were land mines. We went round to Lombard Street to help as we could see the devastation by the hospital and the wardens, nurses, doctors all working to evacuate the patients from the wards. Matron was there, she was great; she spoke to us to tell us what to do. We actually thought she was a Sister as we had never seen a Matron before. I remember her going back to a ward upstairs and putting the Union Jack through the window. When we got back to our post and told the warden on duty, which was my Dad, about Matron, he said, I think that is something you will remember all your life.”

Later on, in December, when His Royal Highness the Duke of Kent visited the town to see the damage, he met with the Matron of the hospital. He enquired if she had to deal with any of the incendiary bombs herself, and with modesty she simply replied that she had and did not go into any detail. Among the patients to whom the Duke spoke was Maud Ford, who was buried for 16 hours in the cellar of her house on Lombard Street with her husband and child. Joseph was found cradling their 20-month daughter Carol in his arms. Rescuers could hear her crying but when they reached her, both she and her father were dead. Another patient the Duke spoke to, Mrs. Winfred Taylor, was buried for 65 hours. She was visiting her friend, Mrs Botterill at 19 Lombard Street, when a bomb flattened the house. Her friend did not survive. One woman proudly showed the Duke a piece of shrapnel that was removed from her body. She told him that it’s bigger than any piece they found in the men. The Duke praised the local families for their cheerfulness and courage.

Charity Bick lived on the Lyng and registered as a despatch rider for the Civil Defence Services the previous year, putting her age as 16 (when she was actually 14 at the time). She is also awarded a George Medal for her bravery this night, becoming the youngest recipient. The official citation read:

‘During a very heavy air raid, Miss Bick played a heroic part under nerve-racking conditions. At the outset when incendiary bombs began to fall she assisted her father, a Post Warden, to put out one of these, in the roof of a shop, with the aid of a stirrup pump and bucket of water. The pump proved to be out of order, but nothing daunted she proceeded to splash the water with her hands and eventually put out the fire. While endeavouring to get out of the roof the charred rafters gave way and she fell through to the room below and sustained minor injuries.

Miss Bick and her father then returned to the ARP Post. Almost immediately high explosive bombs began to fall and a terrific explosion nearly shook them off their feet. They discovered that a bomb had destroyed two houses opposite and another one nearby. The Wardens attached to the Post were all on duty, so she borrowed a bicycle and rushed out to take a message to the Control Room amidst shrapnel from guns and falling bombs. She made repeated attempts to get through and several times had to dismount and fall flat on the ground for safety. Covered with dirt and grime she eventually delivered the message.

She made three journeys from her Post to the Control Room, a distance of approximately one and a quarter miles, during the height of the raid, and made further journeys afterwards.

Miss Bick, by acting as a means of communication between the Wardens’ Post to which she was attached and the Control Room, did very valuable work and released other Wardens for duty. She displayed outstanding courage and coolness in very trying circumstances.’

Shortly after receiving the award, Charity was presented with a new bicycle by Mr A.L. Gerrard, on behalf of the firm Cuxson Gerrard & Co. Ltd, to assist her in her duties as a despatch rider.   At the presentation, attended by the workforce – who were said to be ‘agog with excitement’, he said ‘On reflection I think that we must recognise that charity has set us all a splendid example, and whilst it may not fall to all of us to win a George Medal, we can nevertheless play outré part in ensuring victory, firstly by applying ourselves assiduously to the work we have to do, and secondly, in supporting the Government by purchasing National Savings Certificates, as the money plays an important part.’

Sir, Re comments by “Interested in Youth”, in your last issue concerning despatch riders equipment. I agree with him: iti s high time something was done. Why should A.F.S messengers be fully equipped and cause discontent among our A.R.P. messengers? We know both services are urgently required, but all will agree that both services should be served alike.

I am a warden, so is my husband (voluntary), and our boy is a despatch rider. We have been in service since September 2nd, 1939. We have had up till recently eight of the smartest and most willing boys at our post, but three have left during the past fortnight to join other services because they get full equipment on joining, and will not have to put up with a lot of empty promises. I do not know who is to blame, but I sincerely hope my letter will help to speed things up a bit.

There is another matter I would like to mention. Youths with cycles are allowed 4s. monthly for cycle maintenance, youths without cycles are get no allowances at all yet have the same duties to carry out on foot – in fact they have done so during the recent bad weather when cycles were of no use at all.

I am afraid that if equipment is not supplied soon there will be no A.R.P despatch riders to call upon. One youth, on enquiring if allowance could be made toward footwear, was told his father should buy it. 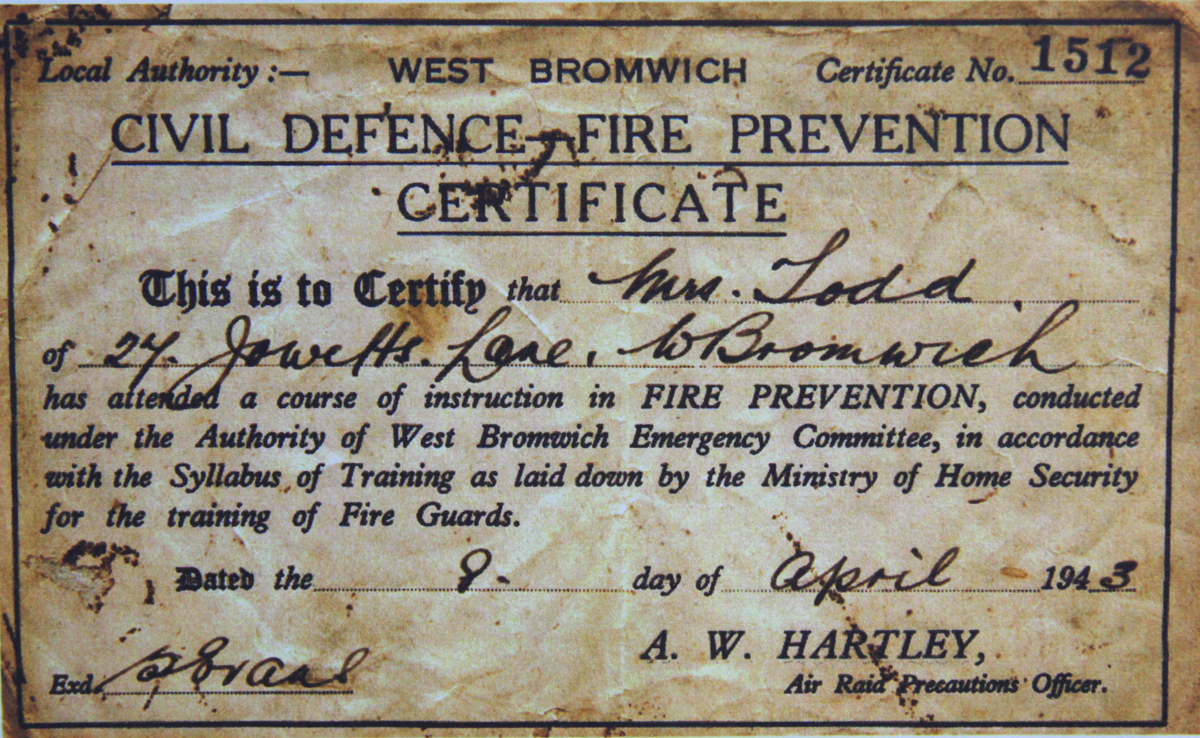 A short story about Charity Bick by Isabella Broome, aged 7, of All Saints Primary School. Story.pdf